A Navy petty officer was arrested Friday night after an extended manhunt because authorities say he stabbed a fellow sailor during an altercation near a Navy medical center in Virginia.

Navy officials identified the suspect as 26-year-old Wilbur Harwell, a 3rd class petty officer who grew up in Montgomery, Alabama.

The stabbing happened at about 8:30 a.m. and forced officials to evacuate patients from the medical center, which was built in 1827 and is the oldest continuously running Navy hospital in the country.

Navy officials told the Navy Times Harwell and the victim, Petty Officer 2nd Class Justin Powell, knew each other and had gotten into an altercation in front of the Navy Exchange that led to the stabbing, though it wasn’t clear what the altercation was about.

2. Powell Was Stabbed 8 Times & Placed in a Coma by Doctors

Wilbur Harwell: The Photos You Need to See

Powell was stabbed eight times, including once in the throat, his father-in-law told WAVY.

Powell’s father-in-law, Rodney Ellison, told the station doctors placed Powell in a 12-hour medically induced coma and won’t know until Saturday if Powell’s voice box was affected. Ellison said his son-in-law is expected to be in ICU for at least a week.

3. The Medical Center Was Evacuated & Put on Lockdown

The medical center said at about 3:15 p.m. on its Facebook page that it was about to begin evacuating, with patients going first, followed by staff. The center said it opened to evacuated in an “orderly manner.”

The evacuation took place a day after the base conducted an active shooter drill, according to the medical center’s Facebook page.

4. Harwell Was Arrested Almost 10 Hours After the Stabbing

The extended manhunt finally came to an end Friday night with Harwell’s arrest at about 5 p.m. Friday.

Portsmouth police said suspect Wilbur Garrett Harwell was arrested around 5 p.m. without incident at 26th Street and Pacific Avenue. He was located after a phone connected to the stabbing was pinged in the area. A Navy spokesperson told WAVY.com he is being interrogated, probably throughout the night.

Watch a video report on the capture above from WAVY.

5. NSA Security Forces Had Been Searching the Base

The medical center urged patience as the NSA led a search of the center. 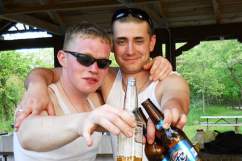 Wilbur Harwell: The Photos You Need to See