Eduardo Campos, a presidential candidate with Brazil’s socialist party, has been killed in a plane crash in the Santos area of the country, according to the BBC.

The crash is reported to have happened at around 11 a.m. Eastern time. The last contact Campos had with someone on the ground was at 10:30 a.m. The BBC reports that Campos was on board the plane with his wife, Renata, and son, Miguel.

The plane was flying from Rio to the city of Guaruja in the Sao Paulo province. 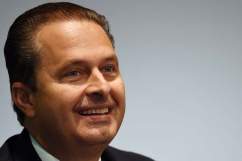 2. The Plane Crashed Into Family Homes

A Cessna 560XL similar to the plane that Eduardo Campos was flying in. (Wikipedia)

The plane crashed into three houses in the Santos area of the city of Sao Paulo. The model was a Cessna 560XL.

3. A Brazilian Politician Called His Death an ‘Irreparable Loss’

A member of the Brazilian parliament, Julio Delgado told reporters “It seems there are no survivors.” He added:

It seems we have lost Eduardo. Eduardo could not land, there are no survivors in the aircraft. It’s an irreparable loss.

5. Campos Was Unlikely to Defeat Rousseff

Campos had been looking to unseat Brazilian President Dilma Rousseff in the 2014 elections. In addition, he was running against Aecio Neves. Betting site, Unibet, were offering odds of 6/5 that anybody would defeat Rousseff.