A 34-year-old man was arrested and charged with the murder of a popular high school teacher and guidance counselor after she was found dead in her apartment in June.

Sharman Odom was charged with the murder of 31-year-old Maggie Daniels, who worked as a guidance counselor at Discovery High School in Newton, North Carolina. Odom and Daniels lived in the same apartment complex, according to WSOC-TV.

Smirking Sharman Odom to be in court tomorrow for murder of Maggie Daniels. @wcnc pic.twitter.com/NbPpVqPvvq

According to The Charlotte Observer, Odom was arrested in 2010 and charged with robbery with a dangerous weapon, first-degree rape, assault by strangulation, burglary and kidnapping. Those charges were dismissed in the months after his arrest. He was arrested again in 2012 and charged with robbery, assault by strangulation and second-degree rape, but those charges were dismissed two months after he was arrested. His most recent arrest was on Feb. 26 when he was charged with reckless driving to endanger and ordered to pay a fine. Odom has not served time in prison, The Charlotte Observer reports.

2. Odom Could Receive the Death Penalty or Serve Life in Prison

According to WCCB, a judge told Odom at his court hearing Monday that he could face the death penalty or life in prison if he is found guilty. Police arrested Odom on Saturday in Winston-Salem, North Carolina, according to WFMY.

3. His Mother Faces Charges for Assaulting a Reporter Outside of Court

According to WSOC-TV, Sharman Odom’s mother tried to knock a microphone out of the hands of one of their reporters and shoved two other photographers, leaving one of the photographers with a cut on his face. She said, “get out of my face,” to reporters as they asked her if she had anything to say about her son’s charges, WSOC-TV reports. The woman is now facing three assault charges as a result of this morning’s events.

4. Warrants Show There Was a Struggle in Daniels’ Apartment

According to WBTV, warrants show there was a struggle inside Daniels’ apartment, leaving Odom missing a patch of hair from his scalp. WBTV reports sources say DNA evidence lead cops to Odom, who had left town Friday night. Cops still won’t say how Daniels died.

5. Odom’s Arrest ‘Will Make a World of Difference’ According to one of Daniels’ Co-Workers

The Lake Wylie Pilot reports Carrie Donley, someone who knew Daniels, said Odom’s arrest will be a relief to the entire community. She said:

It will make a world of difference to this community to have this behind us…and remember Maggie in happy ways instead of a bunch of question marks.

Daniels is buried in Cleveland and is survived by her mother, step-father and four siblings. Her biological father is deceased. 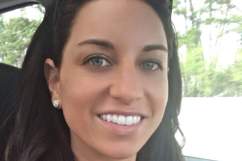 Loading more stories
wpDiscuz
1
0
Would love your thoughts, please comment.x
()
x
| Reply
Sharman Odom has been charged with the murder of Maggie Daniels, a high school teacher and guidance counselor who was found dead in her apartment June 28.