A new social media trend has swept the Arab world, adopting the virality of the ALS Ice Bucket Challenge. Here’s what you need to know about the Burn ISIS Flag Challenge.

1. The Challenge Began in Beirut, Lebanon

The trend started after three Lebanese youths posted pictures of them burning the flag associated with the militant group, also known as Islamic State, in the middle of Sassine Square in Beirut.

The youths decided to burn the ISIS flag, known as the Black Standard, in response to the ISIS beheading of two Lebanese soldiers.

Following the first #BurnISISFlagChallenge, it began to trend on Twitter.

Many individuals have taken part in the challenge, the majority of which reside in the Middle East.

Just like in the ALS Ice Bucket Challenge, you nominate people to take part in the Burn ISIS Flag Challenge.

4. ISIS Has Yet to Respond

ISIS is known to be adept with their social media skills, but have yet to respond to the new fad with comment or violence.

Burning ISIS flag means burning an Arabic sentence which says 'Allah is one and Muhammad is his messenger'. #BurnISISFlagChallenge

Some Muslims are against the Burn ISIS Flag Challenge because of what the flag’s Arabic text translates to:

Allah is one and Muhammad is his messenger.

For some practitioners of Islam, burning such a statement, no matter the reason behind it, is considered blasphemous.

UPDATE: As many people are wondering where to buy an Islamic State flag to participate, the answer is that there are few if any IS flags available, especially in the West. A majority of the Burn ISIS Flag Challenge participants are printing out the flag on paper and burning it symbolically. 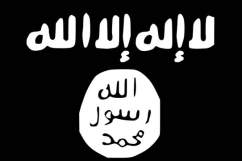 Read More
5 Fast Facts, Exclude, Lebanon
wpDiscuz
7
0
Would love your thoughts, please comment.x
()
x
| Reply
A new viral trend on Twitter has its roots in the ALS Ice Bucket Challenge. Muslims in the Arab world are nominating each other to burn the Islamic State flag.