As the Islamic State continues to spread throughout Iraq and Syria, news stations have been airing the black flag that the terrorist militia has adopted. What does the flag mean? 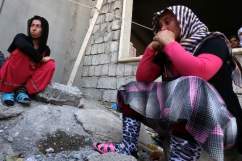 1. It’s Known as the ‘Black Standard’

The Islamic State flag is historically known as the “Black Banner” or “Black Standard.”
There have been multiple versions throughout history.
Its earliest incarnation can be traced to the advent of Islam in 7th century C.E., where Muhammad allegedly spread his teachings under the Black Standard. He adopted this banner custom from the ancient Romans, who conquered the world under the Aquila, or eagle, banner.
Mohammed may have even adopted the eagle name, as early accounts of his conquest cite that he referred to his banner as “the banner of the eagle” also.
As various sects of Islam developed throughout the coming centuries, the Black Standard began to stand for various eschatological ideologies.
Today it is mostly identified with extremist Sunnism and jihadism.

2. The Arabic Text is Called the ‘Shahada’

The above Arabic text seen on the Islamic State flag is that of an Islamic creed called the Shahada, which translates to “testimony.” The testimony confirms that Islam is a monotheistic religion and that Muhammad was its one true prophet.
According to Wikipedia, the Shahada directly translates to:

There is no god but God, Muhammad is the messenger of God.

The Shahada is the most commonly used statement of faith for Muslims, and in Sunnism it is the first Pillar of the Five Pillars of Islam. The other four are:

2. Salat: ritual prayer five times a day
3. Zakat: giving 2.5% of one’s savings to the poor and needy
4. Sawm: fasting and self-control during the holy month of Ramadan
5. Hajj: pilgrimage to Mecca at least once in a lifetime if one is able

3. The Symbol is the ‘Seal of Muhammad’

Like the Seal of Muhammad, the Letters-to-the-Heads-of-State’s authenticity is highly debatable.

4. The Flag Plays Into ‘End of Days’ Eschatology

In Islamic apocrypha, the Black Standard plays into Armageddon stories as the heralding flag of the Mahdi, or the prophesied redeemer of Islam.
There is no mention of the Mahdi in Quran, but stories say that the Mahdi‘s coming is supposed to coincide with the second-coming of Jesus.

5. The Main Goal of the Mahdi is to Establish an Islamic State

Loading more stories
wpDiscuz
66
0
Would love your thoughts, please comment.x
()
x
| Reply
As ISIS/ISIL continues to ravage Iraq & Syria, news stations have been airing the black flag that the terrorist militia has adopted. What does the Arabic text mean and what is the flag's history?