Valanciunas was boxing out Cousins when he elbowed Cousins in the throat. Cousins took exception and wound up as if to throw a punch before thinking better of it. Valanciunas, for his part, appeared to brace for being hit.

Cousins was assessed a technical foul on the play. 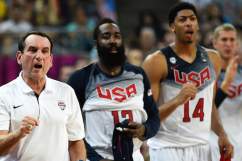 Loading more stories
wpDiscuz
2
0
Would love your thoughts, please comment.x
()
x
| Reply
DeMarcus Cousins was assessed a technical foul in the first half of the United States' World Cup semifinal against Lithuania after nearly throwing a punch.