There’s nothing more American than a Chevy.

Not even the FX show Sons of Anarchy can touch Chevy.

Well, now Chevy has the chance to become quintessential British.

The American automobile giant is now a primary sponsor of Manchester United. Manchester United is a soccer, or football, club that plays in the English Premier League.

It’s the most popular sports franchise in the world.

And it’s not even close.

What that get Chevy?

It got it prime location on the front of the club’s jerseys.

That spot had previously been held by Aon, a London-based insurance company.

To make this work for Chevy it took a lot of forward thinking and imagination.

To get placement like that on the jersey of the most popular sports team in the world is an amazing feat.

Talk about an advertising win.

The exposure alone makes the investment more than worth it.

No matter how many TV, print or radio ads the company does it won’t have the impact has putting your brand on the front of a Manchester United jersey.

“This was always about the fact it’s a global opportunity,” Megan Stooke, director of global marketing for General Motors, said. “Chevrolet as a global brand is really trying to strengthen our position in a lot of the emerging markets.”

Don Draper would have been lucky to pull a coo like this off in Mad Men.

It may have saved his job at the Sterling Cooper Associates.

That’s how huge this is for Chevy.

Right after Chevy inked with Manchester United, Adidas more than doubled that deal with a 10-year, $1.3 billion deal of its own to provide the club with the shirts the Chevy logo will appear.

In all, United as 28 additional sponsors.

Yeah, this is huge for Chevy.

As this ad shows.

Whether this pays off in the end? Time will tell.

But the only way to know is to try.

Think of how many companies would love to have their logo on the front of the United jersey.

Given how this works, most would have never considered it or even tried.

Hence the forward thinking Chevy showed to at least reach out and see if it was possible.

The deal was struck in 2012 by then GM CMO Joel Ewanick.

Ironically, he’s no longer with the company due to irregularities in how he handled it.

Still, the exposure Chevy gets every time United takes the pitch is massive.

Earlier this month, United took a four-game tour of the U.S. One of those matches happened at the Big House on the campus at the University of Michigan before over 100,000 people.

Now as United starts Premier League play, the exposure across the globe will surpass that total in ginormous ways.

But it’s a win for United as well because it increases the clubs reach in America — not that it needed it. Still, it will get it because of this deal.

To this day, nothing is more American than Chevy.

We may not be far out from Manchester United matching Chevy here in America, and Chevy becoming pure English. 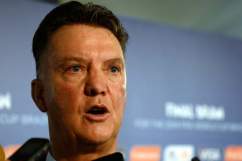