Kevin Vickers is the Canadian parliament’s head of security. He’s being hailed as a hero by members of Canada’s government after reportedly shooting a terrorist gunman dead. On the morning of October 22, after killing a soldier, a gunman stormed Parliament Hill in Ottawa. That attacker was shot dead by Vickers, 58, the parliament’s Sergeant-at-Arms.

Vickers was back at work Thursday and got a well-deserved extended standing ovation from the House of Commons that you can watch in the video above.

A Sergeant-at-Arms is “an officer of an organization (as a legislative body or court of law) who preserves order and executes command.”

After shooting the gunman, Vickers was taken to a police station to make a statement about his actions. It’s not clear at exactly what point that Vickers opened fire. The gunman was killed in the Center Block building in Parliament Hill.

2. Vickers Has Been Sergeant-at-Arms Since 2005

This is Canadian Sergeant-at-Arms Kevin Vickers who reportedly shot & killed one assailant. Ex-Mountie. Still got it. pic.twitter.com/jZr0jLvgEx

In his role as Sergeant-at-Arms, Vickers oversees all security for politicians and personnel of the Canadian government buildings. According to a Globe and Mail article:

[He] sits quietly in his seat in the chamber when the Commons is in session.

The same article says that Vickers “does not seek the limelight or give interviews.”

On his LinkedIn page, Vickers describes his duties as Sergeant-at-Arms:

Oversees the implementation of the Long Term Vision Plan as knowledgeable client for the renovation and upkeep of the Parliamentary Buildings, responsible for Security of the Parliamentary Precinct, oversees operations supporting functions of Parliament including Building Management (30 buildings), Food Services, Tranpsortation, Printing and Mail Services and facilitates the requirements of the National Press Gallery with a team of 1000 employees.

According to his Facebook page, Vickers is a native of Newcastle, New Brunswick, but lives in Ottawa due to his work in the Canadian parliament. 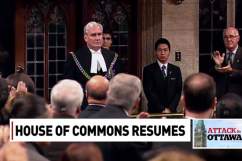 3. He’s a 29-Year Veteran of the Canadian Police

The Globe and Mail reported in 2012 that prior to his appointment as Sergeant-at-Arms, Vickers was a 29-year veteran of the Canadian police. During the 1980s, he was stationed in Canada’s Northwest Territories.

4. He Was Honored by the Association of Progressive Muslims of Canada

This is Kevin Vickers, sergeant-at-arms who reportedly killed a shooter inside the Parliament buildings #Ottawa pic.twitter.com/rUra9TOZpu

In 2009, Vickers was recognized by the Association of Progressive Muslims of Canada for his “long outstanding services to our country” and “efforts to promote bias-free policing and diversity in the workplace.”

5. His Son Once Helped to Locate a High-Profile Missing Teen

Policing runs in the family, Kevin Vickers’ son Andrew is in the Royal Mounted Police. Andrew Vickers is a constable in New Brunswick. According to a CTV News in November 2013, Andrew Vickers was instrumental in finding a missing teen named Gwendolyn Underhill.