A gunman shot and killed a Canadian soldier standing guard at the War Memorial in Ottawa Wednesday, and a gunman was later shot dead by the heroic sergeant of arms inside the Canadian Parliament’s building after opening fire just outside caucus rooms where Members of Parliament were meeting.

The capital city is on lockdown amid fears that there were multiple shooters in what appeared to be a coordinated attack.

The Globe and Mail and other media outlets identified the soldier as Nathan Cirillo, a 24-year-old from Hamilton, Ontario.

Officials at an afternoon news conference confirmed only that the soldier and one gunman had been killed. They declined to say whether a second shooter is suspected and would not confirm reports that the same shooter had opened fire at both the War Memorial and the Parliament building.

The shooting came two days after a recent convert to Islam ran over two Canadian soldiers, killing one, in a hit-and-run attack in Quebec, raising concerns of terrorist activity and prompting the Canadian government to raise its terror alert level from low to medium.

1. A Gunman Wearing a ‘Black & White Headscarf’ Was Killed by the Sergeant at Arms

RCMP yelling everyone to back away from Parliament Hill. Weapons out. Word of shooting inside. #cdnpoli pic.twitter.com/aiXtvjlLP6

The gunman, who CBC reports was a “tall thin man with a black and white headscarf,” ran from the War Memorial toward Parliament Hill, where he entered the Hall of Honor and began shooting, multiple news outlets reported. That’s when Kevin Vickers, the Parliament’s heroic sergeant at arms, shot the gunman, likely saving countless lives, including those of multiple prominent politicians.

CBS News, citing U.S. sources, identified the gunman Wednesday afternoon as Michael Zehalf-Bibeau, a Canadian born in 1982. The Globe and Mail later reported that Canadian authorities had revoked Zehalf-Bibeau’s passport, but not arrested, because he was deemed a high-risk traveler — the same situation that played out with Martin Coutoure-Rouleau, who ran over and killed a Canadian soldier earlier this week in Quebec.

At an afternoon news conference, Ottawa police and Canada’s Royal Mounted Police asked anyone with information about the shooter or the attack to call police at 613-236-1222, extension 5493.

Officials at an afternoon news conference would neither confirm nor deny reports that they were looking for additional shooters.

Conservative member of parliament Stephen Taylor tweeted that the suspect had been shot and killed just after 10:30 a.m. Though just after 20 minutes later, Rosemary Barton of CBC reported that further shots had been fired. She added that police apparently don’t know how many shooters are involved in this. The second round of shots were fired at Chateau Laurier, close to Parliament Hill.

The Telegram reports that the shooter drove to the parliament buildings in a stolen black car with no license plates.

There was another shooting close to a mall that’s near Parliament Hill. The mall, the Rideau Center, is on lockdown.

The building’s management confirmed the shooting didn’t take place inside the shopping center. In total there are three reported shooting scenes:

Map of areas where Ottawa shootings were reported: National War Memorial, near the Rideau Centre and Parliament Hill. pic.twitter.com/NcfNCR5VCV

Witnesses reported hearing between three and four shots. The victim is a soldier, reports CTV News. Ottawa police announced in a statement Wednesday afternoon that the soldier had died.

The shooter’s name and age were not released because of privacy restrictions.

There are also reports that another security guard was shot inside the parliament buildings. 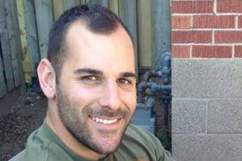 RIP Nathan Cirillo: Photos of the Soldier Killed in Ottawa

3. Members of Parliament Rushed to Safety & Have Been Tweeting About the Attack

Newfoundland Liberal MP Gerry Byrne was inside the Parliament Hill building when the shooting occurred.

At 9:55am I was in a meeting on the 5th floor of centre block in the Leader's office when I heard shots fired. RCMP response was immediate

Significant police presence right outside of the office where I am in lock down. #cdnpoli pic.twitter.com/aJEUk5scV9

Byrne then pointed out that this may be the car used by the shooter:

The black sedan with the door open right below me MAY be what we are hearing is the stolen car the assailant used. pic.twitter.com/BgIAMnwZX3

The Prime Minister is safe and has left Parliament Hill.

Later police asked members of parliament to stop tweeting because the politicians were giving their positions in the building away.

Shots fired during caucus meeting. at least 30 shots. MPs piled out. I'm safe with 2 colleagues but we're still at risk…

4. Parliament Hill Is Swarming With Police

5. The Attack Comes 2 Days After a Radicalized Canadian Citizen Ran Over & Killed a Soldier in Quebec

This attack comes just two days after a man killed a Canadian soldier close to Montreal — an act the man, Martin Coutoure-Rouleau, did in the name of “Allah.” The man posted on Facebook as Ahmad Rouleau. In the aftermath of the attack, where Rouleau was killed, Canadian authorities announced that he was a known-radical. It was also reported that the reason he was so angry was that his passport had been revoked as he attempted to travel to Turkey.

Loading more stories
wpDiscuz
11
0
Would love your thoughts, please comment.x
()
x
| Reply
A Canadian solider standing guard at the War Memorial in Ottawa was shot dead by a gunman who later opened fire inside the Canadian Parliament before being shot dead by the heroic sergeant at arms.