A train-surfing daredevil with a promising acting career has died after being electrocuted and set on fire while riding on the outside of a New York City-bound train, according to messages posted on his Facebook page. Brian McClellen, 21, was found on top of a Metro-North train, flaming, after he hit an electrical wire early on Sunday morning. The New York Post reports that the train lost power and stopped, and that’s when crew members discovered McClellen and doused him with fire extinguishers. The Hartford Courant reports that McClellen had burns on 85 percent of his body.

1. He Was ‘Apparently Intoxicated’ When He Climbed on the Train

NBC Connecticut reports that McClellan made contact with a pantograph, which the station described as “a mechanical arm on top of the train that collects power from the overhead wires.”

Video taken at the Stamford rail station shows an apparently intoxicated McClellen climbing on top of the train.

There were 20 passengers onboard the train when the stoppage occurred. The train was scheduled to arrive at Grand Central station at 6:19 a.m.

2. McClellen Was About to Appear in a TV Show With Hilary Duff & a Movie With Pierce Brosnan

McClellen’s agent, Ryan Colby, told the New York Post that McClellen was about to shoot a TV show called Younger, with Hilary Duff. The agent said McClellan had also been booked for a role in Pierce Brosnan’s new movie, Urge.

3. A Year Before His Death, He Said He Was Going to Change the World

According to his Facebook page, McClellen was an “actor and model.” He was a native of Cleveland but was living in New York City, close to Union Square. Other posts on his Facebook page show him in Las Vegas and Italy during the summer of 2014. In the About section of his Facebook profile, McClellen wrote that he was a graduate of North Royalton High School in the Greater Cleveland area. He also said he used to work at Aeropostale in Times Square. During Thanksgiving 2013, he wrote on his Facebook wall:

You know. I know im going to change the world. Its only a matter of time. I cant wait until i can give my family what ever they want. I cant wait until i can take my nanny to paris. My family anywhere they want and the freedom to do what ever they want. I will change the world to anybody who reads this you have my word. I was put on this earth for a reason and i know that reason. Have a wonderful rest of thanksgiving everyone!!!

4. He Was a Skateboarder Known for His Daredevil Stunts

On his Facebook, McClellen often posted video and photos of himself performing daredevil stunts. In August 2014, he’s shown playing on train tracks with his sister. In another incident, he recorded himself jumping off of a bridge into water. He also has a YouTube channel that he used to promote his skateboarding skills.

5. The Incident Is Still Under Investigation

NBC Connecticut reports that MTA investigators are reviewing security procedures and investigating the incident to discover how and why McClellen got onto the roof of the train. The MTA makes a brief reference to train-surfing on the safety section of its website:

You risk serious injury if you ride on top of the train (surfing) or ride holding onto outside doors (skylarking). 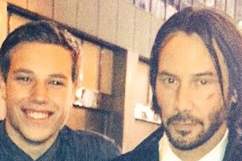 Loading more stories
wpDiscuz
20
0
Would love your thoughts, please comment.x
()
x
| Reply
Brian McClellen, a daredevil actor who was about to shoot a TV show with Hilary Duff, has died after being electrocuted by a 12,000-volt power line while surfing a train.