Jaime Gardner is the wife of Cory Gardner, the U.S. Representative who won the Colorado Senate seat.

He won a tight race against incumbent Mark Udall, covered heavily because of the role it could play in determining which party wins control of the Senate.

Jaime Gardner was been a low-key presence in the campaign, spotted at campaign stops and walking alongside her husband at parades and local events.

1. She is an Energy Industry Executive

Her LinkedIn page states that she is the Executive Director of the Colorado Research Alliance, based out of Yuma. Their website says that their mission statement is to “organize, educate, encourage, and facilitate participation of Colorado businesses, ranchers, industry groups, and local governmental entities in the state and federal regulatory process.”

She is also listed as being Principal at High Plains Communication, working on public relations and environmental analysis consulting.

She recently left her position as President/Executive Director of the Consumer Energy Education Foundation, a non-profit that aims to educate the public about traditional forms of energy production.

2. They Have Two Children Together

The couple have two children together.

Alyson, the oldest, is 10. She featured in Gardner’s first campaign ad for his Senate run.

Thatcher is 2, and has also appeared in a campaign ad, called “Big Shoes“.

3. She Is Pregnant With Their Third Child

Cory Gardner announced his wife’s pregnancy with their third child on Twitter on July 8.

He posted a picture of the family’s cowboy boots lined up in order of size, with a small pair at the end representing their future child.

He captioned it, “Alyson & Thatcher (and Mom & Dad!) look forward to a new set of spurs joining the family. Due around the New Year!”

4. The Family Live in Yuma

Gardner and his family live in the small town of Yuma. According to his campaign website, he is a fifth-generation Coloradoan and lives in the same house his great-grandparents lived in.

5. She Has Not Been High-Profile During the Campaign

Despite the prominent role her children have played in the campaign, Jaime Gardner has been fairly low-key during the race.

She has appeared at few official campaign events and has not featured prominently in any campaign ads.

Speaking to the Colorado Independent, Debbie Brown of the Colorado Women’s Alliance said, “I think she’s taken a very supportive role, but it’s much more low-key.” 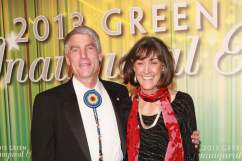