Polls open across the United States today as candidates vie for Senate, House, and Governor’s races, in addition to races for lower-level offices in state and municipal races.

Voters’ decisions will affect the control of the Senate and the tone of President Obama’s final years in office.

Here’s what you need to know about the day:

1. It’s Easy to Find Out About Your Polling Place

There are many ways to find out about where and when you can vote.

If you search ‘where to vote’ or ‘when do polls open’, Google has a built-in search tool where you can enter your address and get answers.

Rockthevote.com also has a search tool for ‘Voting Information Lookup‘, where voters can search what is on the ballot and where they can vote.

2. You May Not Have to Be Pre-Registered to Vote

In many states, to vote in the midterms on Tuesday a voter must have handed in a voter registration prior to the date of the election to be considered registered and eligible to vote in these elections.

However, in a minority of states it is possible to register in person on Election Day.

This list happens to include some of the states with the closest-run races during this campaign season.

3. TV Is Covering the Midterms Heavily

News channels will be devoting the entire evening to covering the elections.

CNN’s coverage will be led by Wolf Blitzer and Anderson Cooper, joined by Jake Tapper. They apparently have more than two dozen reporters across the country covering the midterms.

Nate Silver of fivethirtyeight.com will be on ABC’s coverage, led by George Stephanopoulos.

4. CNN Is Taking Over the Empire State Building for the Night

CNN is going to be using the Empire State Building as part of their elections coverage, taking control of the iconic lighting to help show the progress of the voting results.

They will be projecting blue and red lights on its side until one party controls the Senate, at which point the whole building will turn that color.

5. There Will Also Be Coverage Online

Many news networks are also featuring online coverage of the elections, through newscasts and online streaming of their coverage.

FoxNews.com’s “The Strategy Room” will start streaming at 9 p.m. and run through 11 p.m. CNN.com’s “HambyCast” coverage will start at 8 p.m., hosted by Peter Hamby. USAToday.com’s coverage will have a more local focus, with reporters from local stations across the country contributing.

Twitter was a large part of many of the campaigns, both for candidates and supporters and for those weighing in from the outside, and it will also play a large role during the election results. 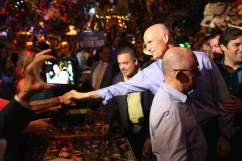 Loading more stories
wpDiscuz
1
0
Would love your thoughts, please comment.x
()
x
| Reply
Everything you need to know about when, how, and why to vote in the 2014 midterm elections.