Antonio Martin, 18, was shot and killed by an officer with the St. Louis Police Department. Surveillance video shows he raised a gun at the cop.

The incident occurred on Tuesday, December 23 at 11:15 at a Mobil gas station.

…police visited the gas station when a report of a larceny came in. The victim, who is 18 years old that has not been officially named by police, pointed a gun at the officer which sparked the deadly shooting…

The shooting sparked another wave of unrest as the local African American community compared it to the deaths of Michael Brown and Eric Garner, who some claim were the victims of police brutality.

However, the video surveillance clearly shows that Martin was the instigator.

Sergeant Brian Schellman said a police officer with the City of Berkeley Police Department was conducting a routine check at a Mobil gas station when he noticed two male subjects standing on the side of the building. The officer reportedly exited his vehicle and approached the subjects, when one of the men pulled a handgun on him.

The incident occurred just 5 miles from Ferguson, the epicenter of the current race riots. 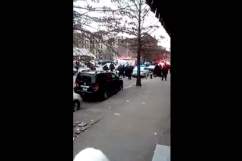