1. She Told Heavy.com That She Was Bored at OSU

KEZI in Oregon reports that Sunderland has been charged with public indecency. One student at OSU told the station, “I feel like it’s always packed. I don’t know how anyone could get away with it.” A university spokesman said that the library is patrolled by security staff constantly, but they can’t cover every inch at all times.

The Statesman Journal reports that Sunderland is no longer enrolled at the school. She was last a student during the fall of 2014. On the social media site Ask.fm, Sunderland said< she got into OSU thanks to her "good grades" and that she took "harder classes" in high school. Among the classes she took at the school were human sexuality, self and society and psychology. She told Heavy.com that she left the school because "it wasn't what I wanted for my life. I was bored there." 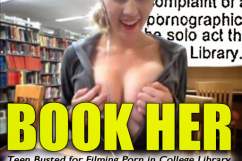 Kenda Sunderland Says She Was Bored at OSU

2. She Was Ratted Out by a Fellow OSU Student

The girl who allegedly dimed Sunderland out to the cops. (Instagram/Kaitlyny_21)

On January 27, 2015 at approximately 2:30 p.m. I was tasked into a complaint of a video of a female that was posted to a pornographic site claiming that the solo act that was being performed occurred in the Oregon State Library. I was able to identify the suspect as the female and she admitted that she performed the act in the OSU Valley Library back in October.

Sunderland told Heavy.com that she doesn’t know Yarnell at all. The Oregonian reports that Sunderland admitted the charge to police.

The complaint adds that Sunderland was cited and released for the crime. You can read the full police log entry here:

According to her Facebook page, Sunderland was dating a guy throughout 2013. That boyfriend told Heavy.com that while he dated Kendra she was a “completely different person,” that he “loved her,” and he was a “huge part of her life.”

Speaking to Heavy.com, Kendra said that contrary to answers she gave on her Ask.fm page, she never cheated on him. Kendra also told us that she has dated another guy since then but is no longer with him either.

She appears to have two Facebook accounts. On the one with the most recent activity, she does not list herself as a student at the University of Oregon. In the older one, she does. She’s a native of Salem, Oregon. In June 2013, she graduated from West Salem High School. A friend described Sunderland to Heavy.com as “kind of a party girl.” In her Ask.fm, Sunderland says she smokes “as much [weed] as [she] can.”

Prior to her burgeoning porn career, Sunderland worked at Uncle Doc’s Diner in Lebanon, Oregon, the diner that replaced Herschel’s Old Fashioned Ice Cream Parlour in the town. According to the Lebanon Express, Sunderland went by the nickname, Number One. In a report on the diner, it says that Kendra had been using Facebook to promote the restaurant. She said about her job, “The boss is really nice, but a bit goofy. I can’t wait until the place opens. I’m looking forward to working with people.” When contacted by Heavy.com, an employee of the diner abruptly hung-up the phone when asked about Sunderland. On her Facebook page she says she last worked at American Easel, an art supply store. 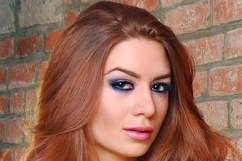 Loading more stories
wpDiscuz
18
0
Would love your thoughts, please comment.x
()
x
| Reply
Kendra Sunderland is the former Oregon State University student who made a video while pleasuring herself inside the campus library, it was then uploaded it to the Internet.