President Barack Obama delivers the State of the Union address on January 28, 2014 (Getty)

President Barack Obama will deliver another State of the Union address on Tuesday. The practice of giving an annual national update has changed quite a bit over the years, along with national politics and available technology.

Here’s what you need to know about the history of the State of the Union:

1. George Washington Delivered the First State of the Union

The first official presidential speech before a joint session session of Congress was given by George Washington on January 8, 1790, in New York City. At the time, New York was the nation’s provisional capital.

Eleven years later, in 1801, then-president Thomas Jefferson discontinued the practice of a live speech to Congress at his first State of the Union, because he believed it was too close to the practice of a “speech from the throne,” popular in many monarchies.

According to Gerhard Peters of The American Presidency Project:

“Federalists Washington and Adams had personally addressed the Congress, but Jefferson was concerned that the practice of appearing before the representatives of the people was too similar to the British monarch’s practice of addressing each new Parliament with a list of policy mandates.”

Annual presidential addresses to Congress would remain written until 1913, when Woodrow Wilson decided to reinstate the in-person speech before legislators.

Delivered orally or in written form, the State of the Union, or something like it, is Constitutionally mandated.

Article II, section 3, clause 1 of the United States Constitution states that the president “shall from time to time give to the Congress information on the State of the Union, and recommend to their Consideration such measures as he shall judge necessary and expedient.”

2. FDR Coined the Phrase, ‘State of the Union’

Prior to 1937, what is now called the State of the Union Address was referred to as “the President’s Annual Message to Congress.”

Though some historians have suggested that the term “State of the Union” only came into being after World War Two, a Congressional report prepared in 2006 on the history of the address notes that President Franklin Roosevelt’s papers refer to his 1934 message as an “Annual Message to Congress on the State of the Union.”

The term “State of the Union” was the informal term for the address from 1942 to 1946, according to the Office of the Clerk of the House of Representatives, and became the general term in 1947.

Bill Clinton’s 2000 State of the Union address took 1 hour, 28 minutes and 49 seconds long to deliver, including gaps for applause, which is the longest such speech since they were measured in terms of time. By way of contrast, George W. Bush’s 2006 lasted 51 minutes including more than 60 interruptions for applause.

Had President Harry Truman delivered his 1946 message in person, he might have given Clinton a run for his money. While Clinton’s 2000 address was less than 10,000 words in length, Truman’s 1946 speech was over 25,000 words.

The record for the shortest speech in State of the Union history is held by George Washington, whose first was comprised of only 833 words. It is estimated that, at modern rates of speech delivery, between 115 and 175 words per minute, Washington’s speech would have lasted no more than seven minutes not counting time for applause.

4. Reagan’s Speech Was the Only SOTU to Be Postponed

President Ronald Reagan’s 1986 addressed was scheduled to be delivered on January 28, though tragedy intervened.

On the scheduled morning of the State of the Union, the space shuttle Challenger broke apart 73 seconds into its flight, killing all seven of its crew.

5. Truman’s SOTU Was the First to Be Televised

In 1965, President Lyndon Johnson changed the time of the speech from mid-afternoon to 9 p.m. so as to better accommodate a live television audience. By the time President George W. Bush delivered his 2006 address, 41.7 million people would tune in to watch.

Only 24 years before Truman, President Calvin Coolidge delivered the first address to be broadcast on radio.

Fifty-five years after Truman, in 2002, George W. Bush would be the first president to make his State of the Union available live on the Internet. 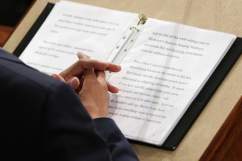 WATCH: Full Video of Barack Obama’s 2014 State of the Union

Read More
5 Fast Facts, Politics, State of the Union
wpDiscuz
0
0
Would love your thoughts, please comment.x
()
x
| Reply
President Barack Obama will deliver another State of the Union address on Tuesday. The practice has a lot of history and has gone through many iterations.