A fiery explosion rocked Southern California after an accident at the Torrance Exxon Refinery. Some residents of the area thought there had been an earthquake as the ground shook close to the facility. The refinery is located at 3700 West 190th Street in Torrance.

1. Flames Shot Up Into the Air From the Refinery

ExxonMobil Refinery Blast, Explosion and Fire in Torrance, CaliforniaThis toxic smoke has been going into the atmosphere for well over 2 hours and it is still burning and sending this toxic smoke into the sky at a rapid rate. No end in sight. The good news is now Exxon can explain why they will raise gas prices. Please note this does not show…2015-02-18T18:01:48.000Z

NBC Los Angeles reports that the explosion may be related to drilling on the 750-acre site. You can watch video from the scene above. Speaking to CBS Los Angeles, Torrance Fire Captain Steve Deuel said that a petroleum leak “prompted a refinery worker to activate the plant’s flare system.”

The entrance into the Torrance refinery. (Google Street View)

ABC Los Angeles reports that incident occurred at around 9 a.m. local time. Flames can be seen shooing from the site. The fire has been described as a second-alarm fire explosion by the Torrance police. Students in the Torrance Unified School District were being told to shelter-in-place, that order was lifted around two hours after the explosion happened.

CBS Los Angles reports that their are 4 injuries so far after the explosion. Neither of the injured persons required medical transport. The ground fire on the site was quickly extinguished by the 47 or so responding firefighters.

In a statement, Todd Spitler of Exxon said, “Our main concern is for the safety of our employees and our neighbors. We are accounting for all personnel and still evaluating the cause of the incident, or the occurrence or amount on any damages.” Photos and local TV footage shows massive damage to the facility. At around 10:30 a.m., it was announced that all personnel had been accounted for. You can watch video of the aftermath of the fire above.

3. Ash Was Falling From the Sky in Torrance

Several Twitter users have reported ground shaking and ash falling from the sky, coincidentally on Ash Wednesday. A witness to the explosion told KNX 1070 Newsradio, Debbie Hernandez said, “At the time a big white plume of smoke went up it felt like an earthquake, and then we looked out and saw the plume of smoke over the mobil, and right now I am looking at two of the stacks that are flaming.”

Another witness told the station that a hissing sound can be heard coming from the facility. An air quality warning was not issued in the area but residents were being advised to stay indoors for a time after the fire.

4. Exxon’s Website Says the Refinery Is ‘Committed to Zero-Tolerance of Any Negative Impact to Our Neighbors’

According to Exxon’s website, 650 people are employed at the site in Torrance. Around 1.8 billion gallons of gasoline are produced there yearly. On the refinery’s profile, it reads that the “Torrance Refinery is committed to zero-tolerance of any negative impact to our neighbors.” and “As a good neighbor, ExxonMobil looks for ways to improve the quality of life wherever we do business.” It adds that the refinery has “adapted to the times” and the “number one priority is the safety and health of our employees and community.”

5. Less Than 6 Months Ago, the Refinery Was Rumored to Be Up for Sale

In September 2014, the Daily Breeze reported that the refinery was up for sale, something that was denied by Exxon. The refinery has been in the town since 1929. It was first reported in a Reuters feature that the facility was on the market. The reason for the sale was said to be California’s tougher environmental stance on oil refineries. There is a concern that the explosion could result in higher gas prices in California, reports the Los Angeles Times. 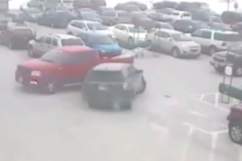 Read More
5 Fast Facts, Breaking News, Los Angeles
An massive, ground-shaking explosion at an Exxon refinery in Southern California has prompted a lockdown in the town of Torrance.