A transgender 16-year-old in North Carolina committed suicide shortly after he had begun his transition into a man. In a string of notes left on Ash Haffner’s iPad, he spoke about the bullying he received.

Here’s what you need to know about the tragic struggle of Ash Haffner:

1. Haffner Didn’t ‘Want to Be Remembered as the ‘Fa**ot Gay Girl With Scars on Her Arms’

On February 26, Haffner walked in front of a car, killing himself. The suicide was prompted by bullying, according to his mother, April Quick. The Union County Sheriff’s Department is investigating the case a suicide. In one of the many notes he left on his iPad, which April Quick has posted on her Facebook page, Haffner wrote:

I don’t want to be remembered as the fa**ot gay girl with all the scars on her arm. Unfortunately that’s who I am to a lot of people…I just didn’t understand why I felt the way I did when I had a decent life. Just remember me as someone who understood and stayed strong for as long as I could.

In another note, Haffner wrote, “Please be WHO YOU ARE… Do it for yourself. Do it for your happiness. That’s what matters in YOUR life. You don’t need approval on who you are. Don’t let people or society change who you are just because they’re not satisfied with your image.” A few days after his death, April returned to the spot where Haffner committed suicide in Indian Trail, North Carolina, and placed flowers and a balloon. She told WSOC-TV, “Ash had been so strong for years. Ash started enduring the most bullying when she cut her hair short.”

2. His Mother Says She Is ‘So Lost’ Without Ash

There has been an outpouring of support for Haffner and his family on social media with the hashtag “#doitforash” trending in North Carolina. His classmates at Porter Ridge High School held a vigil in his honor while also speaking out against bullying. WSOC-TV reported on the vigil, saying, “A large group circled the school rock, which was painted with a rainbow in honor of Ash. Family and friends lit candles, shared memories of the teen and pleaded for acceptance of all people.” A website, Do It For Ash, has also been set up in his honor.

It’s almost been two weeks & I’m so lost without you…You are missed & loved by everyone. I’ve been braving trying to go through your videos & photos. I’m so thankful you took Soooo many I love hearing your voice…It’s painful, but I’m blessed at the same time to have all this. When it gets really hard, I’ll come across something that just makes me laugh. I miss all the laughter you brought & all the funny things you did. I miss you!!

Ash at the Pride parade in Charlotte during the summer of 2014. (Twitter)

April Quick told the Enquirer-Journal that that in eighth grade Haffner came out to her about his interest in girls. Quick says she told Ash — who at that point was a lesbian and not identifying as transgender — “I will not love you any differently. I will not look at you any differently.” Quick added that she didn’t feel a single incident of bullying led Ash to his tragic decision but that it was pent up rage over time. In a separate interview with WSOC-TV Quick mentioned that she attended Charlotte’s Pride parade during the summer of 2014.

4. Ash Was a Passionate Musician

Ash was a musician whose music videos have been posted to YouTube by his mother since his death. On a tribute Facebook page for him, his mother posted one of his music clips, saying, “A reminder that Ash ‘loves’ you, I love you and we need to love one another. I am so touched seeing how many people have come together to turn Ash’s tragedy and any one else who has gone through/is going through tough times into something positive. Let’s continue to spread Ash’s voice not only for Ash but for EVERYONE!!”

In October, Ash posted this poster on his Facebook page.

On the CDC’s website, the section on LGBT Youth reads:

Some LGBTQ youth are more likely than their heterosexual peers to experience difficulties in their lives and school environments, such as violence.

The page also says that LGBTQ youths in grades 7-12 were twice as likely to have attempted suicide than their heterosexual peers.

In one study specifically of transgender students, a shocking 25 percent of those surveyed had attempted suicide. 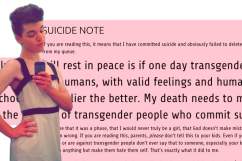 Loading more stories
wpDiscuz
8
0
Would love your thoughts, please comment.x
()
x
| Reply
A transgender North Carolina teenager committed suicide due to the bullying he received after beginning his transition from Ashlyn Haffner into Ash Haffner.