Denise Huskins, who has been missing since Monday after her boyfriend said she was abducted from their Vallejo, California home, was found safe in Huntington Beach Wednesday morning, her father told the San Francisco Chronicle.

Police said Wednesday night in a press release there is now no evidence that she was taken in a “stranger abduction,” and it appears the kidnapping was a hoax.

1. Police Say Huskins & Her Boyfriend Led Them on a ‘Wild Goose Chase’

After an afternoon press conference where police declined to provide details of the investigation, many questions were left about what happened to Huskins. But police did say at the time they were still treating the investigation as a kidnapping for ransom.

The tone changed Wednesday night, when police sent out an updated press release saying “there is no evidence to support the claims that this was a stranger abduction or an abduction at all. Given the facts that have been presented thus far, this event appears to be an orchestrated event and not a kidnapping.”

Police originally said she was taken from the home at about 3:30 a.m. Monday and her boyfriend reported the kidnapping several hours later, at about 1:55 p.m. Monday. Huskins’ boyfriend, Aaron Quinn, told police a story that they “had trouble believing,” according to Lt. Kenny Park, a department spokesman. He said he told police the “kidnappers” had demanded an $8,500 ransom.

Park said there were 40 officers from his department, other agencies and more than 100 support staff dedicated to the search, which diverted attention and resources from “real victims.” Park said Huskins and her boyfriend owe an apology to the community.

He called the search a “wild goose case,” that led to a waste of resources for nothing.

Police said Huskins, who was with family in Huntington Beach, had promised to meet with Vallejo police, and the FBI arranged a jet to bring her to northern California. But Huskins has not met with police, has hired an attorney and “detectives have been unable to contact either Ms. Huskins or family members. … Detectives are unaware of her location.”

Police said “if evidence indicates that either Ms. Huskins or Mr Quinn committed a criminal act, the Vallejo Police Department will request either state or federal charges.”

Police said they’d “like to ensure the public that there is no indication that this was a random act of violence.”

2. She Called Her Father & Said She Was Dropped Off in the LA Area

NOW: Dad of kidnapped Denise Huskins says he got a message from his daughter she was dropped off down in LA area. pic.twitter.com/Bbe565Qs4a

Huskins’ family said her father received a call from Denise telling him she was safe, according to NBC Bay Area.

Her cousin told the Chronicle that Denise was dropped off, unharmed, by an unknown person, at her father’s Huntington Beach home. Her father had gone to Vallejo to meet with police there.

Huskins’ father, Mike, told the Chronicle he doesn’t think his daughter “knew what a big deal this is,” she just said “‘Dad, I just want to let you know that I’m all right.’”

She is originally from Huntington Beach, which is in Southern California. Huskins moved north to Vallejo in June 2014, according to her Facebook profile. She went to college at Long Island University in New York and also worked in the Boston area.

'I almost had a heart attack,' said Mike Huskins after hearing voicemail from missing daughter Denise.

3. Her Boyfriend Told Police He Witnessed the ‘Kidnapping’

Police said at a press conference Tuesday that Huskins’ boyfriend witnessed the kidnapping. They said it’s not clear why he didn’t report the abduction immediately. Police didn’t identify the boyfriend, but according to public records the home where Huskins was abducted from is owned by 30-year-old Aaron Quinn.

He told police she was taken from the home in a white Toyota Camry that her family believes belongs to her boyfriend, according to CBS San Francisco. The San Francisco Chronicle reported that the car is registered to Quinn and neighbors told the newspaper he lives in the house with Huskins.

The vehicle was later located at an undisclosed location, but police were asking anyone who may have seen the car to contact investigators.

A Honda SUV was towed from the scene Tuesday. The San Francisco Chronicle reports the car belongs to Huskins.

Police said about 75 searchers were looking for Huskins in the Vallejo area.

Rescuers searching for signs of #denisehuskins in marshland near #mareisland home where #vallejo police say… https://t.co/RII4acrgCd 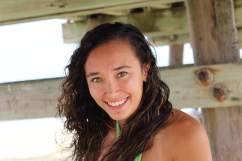 4. A Local Newspaper Received an Email & Audio Recording From the Kidnappers

#vallejo police is interviewing man who reported #DeniseHuskins kidnapping. Not in custody nor a person of interest. pic.twitter.com/zDV2J7rn9O

Police said at a press conference that her boyfriend was being interviewed and cooperated with police, but is not in custody or a suspect. Police said the boyfriend told investigators there was a ransom demand made, but released no other information.

The Chronicle newspaper reported Tuesday that it received an email that afternoon from someone claiming to be holding Huskins. The newspaper passed the communication on to police, but declined to publish details of the email.

The Chronicle’s No. 1 priority is to get Ms. Huskins back with her family as soon as possible. Insofar as it helps ensure Ms. Huskins’ safety, we wish to keep that line of communication open, which is why, at this time, we will not release any additional information about the nature of the communication.

After Huskins was found safe, the Chronicle released an audio recording that was attached to the email the newspaper received.

In the audio, a woman identifies herself as Huskins, talks about the recent French Alps plane crash to establish the date and gives a personal detail about her self. She says in the recording “I’m kidnapped, otherwise I’m fine.”

In the email, the newspaper reports, the captors said Huskins would be returned safely on Wednesday. The email read:

We will send a link to her location after she has been dropped off. She will be in good health and safe while she waits. Any advance on us or our associates will create a dangerous situation for Denise. Wait until she is recovered and then proceed how you will. We will be ready.

The newspaper played the recording for Huskins’ father and he confirmed it was her.

5. She Works With Her Boyfriend at a Local Hospital

She previously worked at the Southern California Orthopedic Institute in Valencia.

Her father told the Chronicle that things seemed to be going well with Quinn. A few days before she went missing, Huskins told her father, “Dad, I’m in love.”

Loading more stories
wpDiscuz
2
0
Would love your thoughts, please comment.x
()
x
| Reply
Denise Huskins was found alive in her hometown of Huntington Beach, two days after she was kidnapped from her boyfriend's home in Vallejo, California.