Two St. Louis County police officers were shot early Thursday in Ferguson as about 100 protesters gathered following the resignation of city Police Chief Tom Jackson, the St. Louis County Police Department said on Twitter. The shooting was caught on video, which can be watched above.

About four or five shots rang out, sending police ducking for cover and protesters scattering. The shots were reported about 12:15 a.m.

A police officer was just shot. At random. None of us saw who did it. Everybody cleared the lot.

Video taken at the scene by DeRay McKesson, one of the protesters, showed the chaos after the shooting:

1. Both Officers Were Released From the Hospital

Belmar said one of the officers had a bullet lodged behind his ear, according to the St. Louis Post-Dispatch.

2. Police Had Blocked in Protesters

Protesters had come together near the police station after Jackson’s resignation was announced earlier. Some arrests were made and officers, some in riot gear, had blocked off the street on both sides of the protesters, according to Twitter posts by community organizers at the scene.

These videos, taken by Deray McKesson, was from before the shooting:

At least two arrests were made before the shots were fired:

And they finally carry him to the wagon. Ferguson PD. https://t.co/hlKUpeeqbM 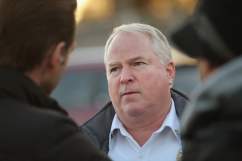 3. The Shots Apparently Came From a Hill Above the Police & Protesters

The shooter was at the top of the hill. Ferguson PD.

Protesters said on Twitter that the shots did not come from the group of about 100 gathered in the police department’s parking lot, but from behind them. Witnesses said the shots seemed to come from the parking lot of Andy Wurm Tire & Wheels, located on South Florissant Road, across the street from the police headquarters. St. Louis County Police Chief Jon Belmar said at a press conference that the shots appeared to be targeted at the officers, and that the shooter, or shooters, may have “embedded” in the protesters.

Shots did NOT come from the crowd of protesters in the Andy Wurm lot. We heard them from the hill adjacent to us.

Couple of Ferguson witnesses tell me they heard shots whizzing past their heads. One saw a muzzle flash from up the hill by Andy Wurm's lot.

To be crystal clear: Three witnesses tell me shots at Ferg. PD didn't come from demonstrators, but up Tiffin Ave. on the hill by Andy Wurm.

4. Police Are Searching for The Shooter

According to the St. Louis Post-Dispatch, police swarmed a house four blocks west of the police department Thursday morning. Officers had three people, two men and a woman, in custody. They were brought out in handcuffs. Police said no one had been charged as of Thursday afternoon, but that they were questioning people.

Tactical unit open roof vent, guns drawn searching for suspect they believe to be in the attic of a #Ferguson home pic.twitter.com/PCrn0ikD7N

5. The Incident Comes 7 Months After the Death of Michael Brown

Tension remains high in Ferguson after Brown was fatally shot seven months ago by Officer Darren Wilson, who was not charged in the shooting. A scathing Justice Department report released last week found racism in the practices of the police department and city, leading to the resignations of Jackson, the city manager, two officers, the city’s top judge and court clerk.