Ferguson Police Chief Tom Jackson is the latest in a line of city officials to resign after a Justice Department review found a culture of racism in the city and its police department. Jackson’s resignation comes seven months after the death of Michael Brown and the protests that followed.

1. Jackson Says He Doesn’t Want to Be a Distraction

In a statement to the St. Louis Post-Dispatch, Jackson said:

The newspaper posted Jackson’s three-sentence long resignation letter, in which he says he is resigning with “profound sadness.”

After a 30-year career with the county police force, Jackson came to Ferguson to be its chief in 2010.

Jackson will receive a severance payment and a year of health insurance, according to the Post-Dispatch’s Christine Byers. 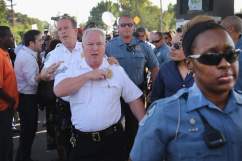 2. The County Police Could Take Over the Department

According to a press release from the city, Jackson will be replaced by Lt. Col. Al Eickhoff on an interim basis. The city says it will conduct a national search for a new chief.

But KSDK-TV reported that the St. Louis County Police could take over the disgraced department. County Executive Steve Senger told the news station he has had conversations with Ferguson Mayor James Knowles:

I can’t really assign a likelihood to it at this point, because there’s a number of factors that play into that. But I can say for certain that we in St. Louis County stand ready to help, and lend our resources and our fine police department wherever it’s needed.

3. Jackson is the Sixth Employee Ousted After the Justice Department’s Report

Jackson joins a lengthy list of employees who have resigned or been fired since the scathing Justice Department report, including city manager John Shaw, municipal judge Ronald Brockmeyer, a court clerk and two officers.

Jackson’s methods of using the police department to raise revenue for the city were among the critiques the Justice Department laid out in its report. The Post-Dispatch reported that Jackson’s officers questioned the emphasis on ticket writing. Jackson also had lobbied for 12-hour shifts so that there would be more officers on the streets for more traffic enforcement. According to the report, those shifts diminish community policing programs. 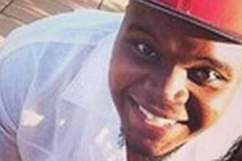 4. Jackson Has Been Criticized for His Actions in the Days After Brown’s Death

Community members angered by the Brown’s death were incensed by the way Jackson handled the days after the shooting. When Jackson released Officer Darren Wilson’s name, a week after the shooting, he did it while also revealing that Brown had stolen cigars and shoved a clerk before the shooting. Protesters claimed Jackson was trying to smear Brown’s character.

What #Ferguson Chief of Police Thomas Jackson did was outrageous!

Jackson was also partly behind the decision to tear gas protesters and bring in heavily armed police to the streets, which led to more outrage from the community.

In a Fox News interview, Jackson responded to criticism of the police:

I’m glad glad that he was able to speak out and say that there’s no excuse for violence against police and to use this incident as starting ground for looting and crime. I talked to some people from the Justice Department today and I think he’s probably going to be briefed a little bit differently. During this whole thing these several nights of riots and all the arrests we’ve made and all the conflict, not a single protester has been injured, and I’m extremely proud of that.

In a statement, the local activists group OBS-St Louis said in a statement said the changes in leadership are “merely incremental,” saying they are still calling for the dissolution of the Ferguson Police Department, more investigations into departments in the St. Louis area that have had similar practices and the public termination of key leaders responsible for making Ferguson the “epicenter of profit policing.”