Discretion is advised as the video, seen below, is very graphic.

Aguayo was treated in the ring by medical staff but was transferred to the local hospital where he was pronounced dead.

According to f4wonline.com, sources at the Hospital del Prado in Tijuana said the initial cause of death was cervical spine trauma resulting the ropes snapped Aguayo’s neck. 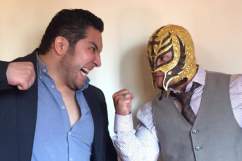