Mitt Romney was the recipient of a sizable donation from Burns in 2012. (Getty)

The Smoking Gun report says that Burns has donated to prominent Republicans such as Romney, Jeb Bush and Rudolph Giuliani, as well as the the Republican Party of San Diego. But he’s also crossed the aisle, having financially supported Obama, John Edwards, and uber-leftist Ralph Nader. Going back to his conservative leanings, Burns donated $1000 to a “swift boat” group who were opposed to 2004 presidential candidate John Kerry. Filings from 2014 also show that Burns had supported openly gay Republican candidate congressional candidate Richard Tisei. Further to the more progressive side of his political character, the Tampa Bay Times reports that Burns donated $400,000, to a group fighting a gay marriage ban in Florida.

2. After His Communications Company Was Bought in 1997, Burns Walked Away With $250 Million

In 1997, when Burns sold his Virginia-based telecommunications company, he netted $250 million in cash and stock, from Excel Communications, which was later sold to Bell Communications, according to Market Watch. After that, along with his partner, the late-Dan Borislow, he founded MagicJack, a company to challenge Skype in going after the make-a-call-from-your-computer market. The MagicJack website shows that company hold numerous patents related to telecommunications.

3. The Judge in the Extortion Case Wants Burns’ Name Out There

A promo for one of Jarec Wentworth’s movies. (Twitter)

According to documents, Brank was arrested in March after he begun “demanding” the keys to an Audi R8 as well as $500,000. The affidavit states that beginning on February 16, Brank sent text messages to a businessman referred to only as D.B. If D.B. didn’t comply, then Brank said he was going to post photos of the pair’s romps on Twitter. One message to D.B. allegedly read “I’m just going to bite hard. I want a new car, motorcycle and both hands full of cash.” Prosecutors say that after receiving these messages, he handed over the cash and the car. Brank and D.B. met each other when the alleged victim sought to invest in the gay porn industry. You can read the full documents above.

If had a nickel for every time a "client" tried to extort me, I would be a billionaire. Finally, what goes around, comes around. #TeamJarec

My comment about the whole Jarec Wentworth thing. My dude you got $500,000 and an Audi….you was GOOD. Got greedy asking for the 1million..

There's two sides to every story. sneaky ass "johns" think they're fucking slick. They pull the dirtiest moves and cry when it backfires. 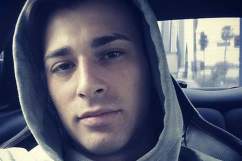