School officials believe Stancil, a former student who had been fired by Lane due to absences from work, used a back stairwell to get into the building. Stancil, who claims his victim was a child molester, has been charged with murder. Investigators are regarding it as a hate crime.

1. He Described His Job as ‘Enforcer at White Power’ 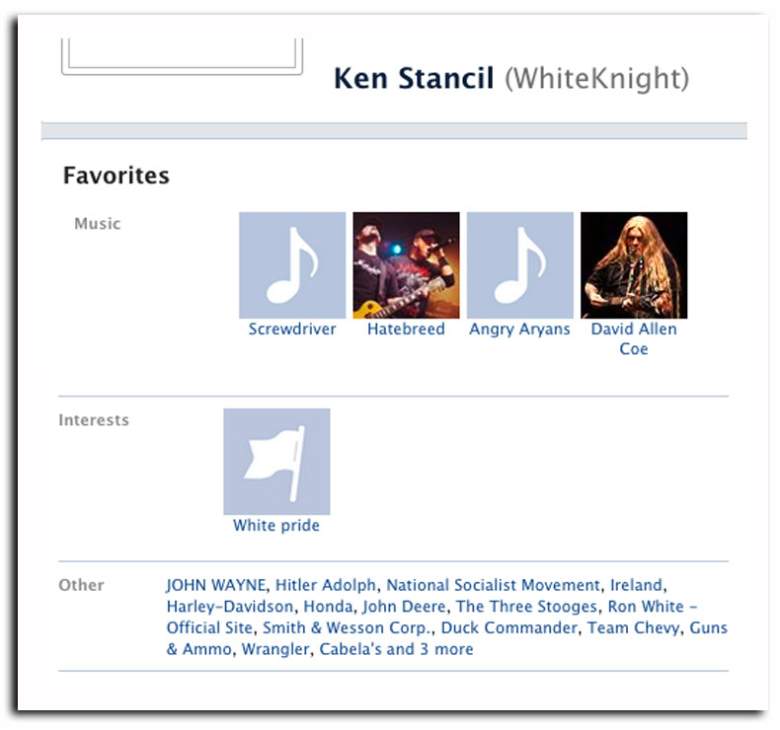 On Facebook, Stancil lists Angry Aryans as a favorite band and “white pride” as an interest. His likes include “Hitler Adolph” and the National Socialist Movement. (Facebook)

On his now-deleted Facebook page Stancil refered to his job as “Enforcer at White Power.” His alias on the site is “WhiteKnight.” Among his likes are the band Angry Aryans, White Pride, Hitler Adolph and the National Socialist Movement.

One former friend described Stancil on Twitter as once being a “sweet, cute boy!” That friend told Heavy.com that she used to attend the same church as Stancil.

A former high school friend of Stancil’s, Bobbi Maniscalco, told Heavy that Stancil would “mostly observe” their group of friends and didn’t talk much. She added that he was a troublemaker who smoked pot and would often cut class. The two were students together at Southern Wayne High School.

A classmate of Stancil’s from Southern Wayne High School, Class of 2013, posted this yearbook picture of the alleged shooter on Twitter. (Twitter/@Crimson_Ivy_NC)

According to police in Goldsboro, North Carolina, Stancil is a former student at Wayne Community. Speaking to CNN, the college’s assistant operations manager described the suspect as a “bald white male, 5-foot-11, with a tattoo over his left eye and a goatee.” He was last seen wearing a blue jacket and light-colored pants. He was armed with a rifle, reports WRAL. He was not known to local police until the day of the shooting.

2. Stancil’s Mother Says the Victim ‘Made Inappropriate Sexual Advances’ Toward Her Son

Stancil at his high school graduation in June 2013 with his mother, Debbie. (Facebook)

College spokesperson Tara Humphries told reporters that Stancil was previously a work study student at the school, where he was employed at the print shop under the supervision of shooting victim Ron Lane. At some point Lane fired Stancil, who is no longer enrolled at the school.

In a Facebook message to WNCN, Stancil’s mother, Debbie, wrote about her son’s firing, saying, “I have the letter that showed he was terminated without consent.” She also claimed that the victim, Lane, had “made inappropriate sexual advances toward [Stancil].”

During the search for Stancil, police were seen entering the family’s trailer in Dudley, North Carolina. His green BMW was seen parked outside, but the suspect was nowhere to be found, reports Allen Etzler of the local News-Argus. An hour after arriving at the trailer, police were seen leaving the home with garbage bags.

According to his obituary, Stancil’s father, Kenneth Stancil Jr., was an Army veteran and a member of the Ghost Riders motorcycle club. He died at the age of 41 in June 2009. Stancil’s mother told WRAL that her son never got over his father’s suicide.

The obit lists Stancil Jr.’s children as the suspect, Kenneth Morgan Stancil III, and two other younger sons. The Stancils run a Family Care Home that offers assisted living for special needs children in Dudley, North Carolina. A search warrant was served as the business as the search for Kenneth Stancil continued. His mother, Debbie, writes on her Facebook page, “I am a hard worker. I enjoy my job and have been in the same field 19 years. I work with special needs children. I get a rush knowing I may have made the smallest difference in their lives.” After the death of her husband in 2009, she is, as of 2012, in a new relationship.

3. Cops Say He Was Armed With a Knife When He Was Arrested on Daytona Beach

Kenneth Morgan Stancil III. The number on his face tattoo, 88, signifies “Heil Hitler” — as H is the eighth letter of the alphabet. (Goldsboro Police Department)

WNCN reports that when Volusia County Beach Patrol officers picked up Stancil around 1:20 a.m. on April 14, he was armed with a knife. The station reports that he was originally arrested while he slept on the beach, which is in violation of local law. He was held in Daytona Beach while prosecutors worked out his extradition back to Wayne County, North Carolina. He appeared in court and admitted to the shooting, telling a judge in Daytona that he “ridded” a child molester from the world. The suspect claimed that Lane had been sexually abusing a young relative, reports WRAL. He was held without bail, and Stancil told the court that “doing time was the easy part.”

In addition to being an employee of the school, Ron “Dwight” Lane, of Seven Springs, North Carolina, attended the community college from 1989 to 1995, according to his Facebook page. He had worked at the school for 18 years. School officials have said that there will be an official service to remember him.

Lane’s boyfriend, Chuck Tobin, was reported as a missing person in July 2014, reported the Goldsboro Daily News. According to WNCT, Chuck Tobin was last seen on July 12, 2014, when he left his home in Seven Springs, North Carolina. The station adds that Charles William Tobin, aka Chuck, was fond of the Cliffs of the Neuse State Park. His remains were found in November 2014 with investigators concluding that Tobin had committed suicide. 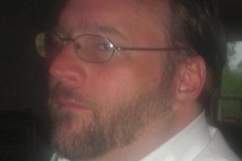 5. There Are 24 Active Hate Groups in North Carolina, According to the Southern Poverty Law Center

The Southern Poverty Law Center’s hatemap shows that there are 24 active hate groups in North Carolina. In total, 14 of these are white power groups, and the rest are mainly black separatist. The SPLC map doesn’t show any groups close to Stancil’s hometown of Dudley, North Carolina.

Loading more stories
wpDiscuz
87
0
Would love your thoughts, please comment.x
()
x
| Reply
A white supremacist skinhead has been arrested in Florida after shooting and killing his gay former boss in the library building at a North Carolina community college, the local sheriff said.