A recording of police scanner audio from Saturday includes Michael Slager’s communication with North Charleston Police Department dispatchers during and after the shooting of Walter Scott.

Slager was charged Tuesday with murder after video was released by a witness showing the officer shooting Scott at Scott’s back eight times as Scott runs away. Scott was shot five times, the coroner’s office said. The incident began with a traffic stop.

Slager initially said he feared for his life after his Taser was taken from him by Scott, according to the Charleston Post and Courier.

The traffic stop happened at about 9:30 a.m., police said, with the shooting happening a few minutes later.

The incident begins in the audio at about the 7:30 mark of the 30-minute recording as Slager calls in a traffic stop. He was pulling over Scott’s Mercedes-Benz for a broken light, police said.

Another officer then arrives and confirms the injuries to the victim. He then says he has started to provide first aid, including chest compressions. An EMS unit arrives at the scene at about the 19:43 mark of the tape, about six minutes after Slager called in the shooting.

Listen to the full recording above. 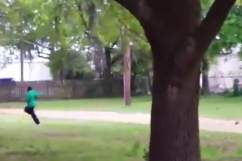