At least one person has been killed in what authorities are describing as an active shooter situation on campus at Wayne Community College in North Carolina. The school sent out a warning about the attack just after 9 a.m. on April 13. As of 10 a.m., the suspect is still at large.

1. One Person Has Been Killed

Evacuated students milling around the campus. (Screengrab via WRAL)

Contrary to reports on social media, there was never any hostage situation on the campus. WITN reports that the shooting took place in the school’s library. That victim, who was a school employee, has died.

2. The School Is Being Evacuated by SWAT Teams

3. The Suspect Has a Tattoo Over His Left Eye

Offices are gearing up with automatic rifles pic.twitter.com/bXhZKZbCyg

The local sheriff’s office have said that a suspect is “under control,” reports the Goldsboro News-Argus. Speaking to CNN, assistant operations manager for Wayne County described the suspect as a “bald white male, 5-foot-11, with a tattoo over his left eye and a goatee.” He was wearing a blue jacket and light-colored pants. He was armed with a rifle, reports WRAL.

4. The School Has Described the Incident as an ‘Active Shooter’

A warning sent out by the school on the morning of April 13 told students that it was not a drill and that there was an active shooter on campus. The nearby Wayne Preparatory Academy school is also on lockdown.

There are nearly 4,000 students enrolled at Wayne Community. According to the school’s Facebook page, it was founded in 1957 and offers 90 separate degree, diploma and certificate programs. The page adds:

Wayne Community College is a learning-centered, public, two-year college with an open door admissions policy. Through its programs and services, the College develops a highly skilled and competitive workforce for Wayne County. The College offers high quality, affordable, and accessible learning opportunities to those it serves.

The school is served by the Gateway bus service in North Carolina. 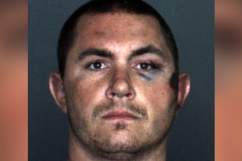 Read More
5 Fast Facts, Breaking News, Crime
At least one person has been wounded in what authorities are describing as an active shooter situation.