Matthew Apperson has been named as the man who shot at George Zimmerman’s head during a road rage incident. The shooting happened in the town of Lake Mary, Florida, on May 11 at around 1 p.m. It’s the second time in less than a year that these two have had a run in together. When Zimmerman spoke to his lawyer after the shooting, he said he knew who did it.

In September 2016, Apperson was found guilty of attempted second-degree murder, shooting into a vehicle and armed aggravated assault. On October 17, he was sentenced to 20 years in prison.

1. The 911 Call Claimed Apperson ‘Had to Shoot’ Zimmerman

There was a “secondary scene” related to the shooting, according to cops in Lake Mary. WKMG’s Erik Sandoval tweeted that the other scene is along Waymont Court in the town, which is close-by to where the original shooting took place. Speaking to the media on the day of the shooting, Apperson’s lawyer, Mark NeJame, said “What happened today, [Apperson] was legally justified to do.” His lawyer said that Apperson believed that Zimmerman was waving a gun at him.

The 911 call emanated from the there, where Kenneth Cornell called police after Apperson told him “I shot George Zimmerman.” Cornell said that Apperson told him that he “had to shoot” Zimmerman. Apperson went on to tell Cornell he’d had run-ins with Zimmerman before, reports Michael Lopardi of WFTV. Waymont Court is where Zimmerman’s ex-girlfriend, Brittany Brunelle, works in a dentist’s office. The suspect went to Waymont Court to call 911, reports Click Orlando. Around the same time that the 911 call was made, Zimmerman successfully flagged down a Lake Mary police officer.

2. In September 2014, Apperson Accused Zimmerman of Stalking Him

George Zimmerman’s truck at the scene. (Screengrab via WKMG)

This was the second road rage incident involving Zimmerman and Apperson, according to police. Back in September 2014, the Orlando Sentinel reported that Apperson didn’t press charges when he alleged that Zimmerman threatened him. During an altercation, Apperson said Trayvon Martin’s killer threatened to shoot him. Apperson called 911 and said “George Zimmerman was the driver, and they were threatening to kick my ass and to shoot me.” Just two days later, the Sentinel reported that Apperson had called police to complain that Zimmerman had been stalking him. Shaun Chaiybhat from Local 6 tweeted that Zimmerman told his lawyer that he recognized Apperson.

3. Apperson Is a Fan of the NRA

No charges have been filed against Apperson in the case. Police have said that they want to speak to both men with their attorneys about the incident. When asked at a press conference if Apperson was claiming self-defense, a Lake Mary spokeswoman, Bianca Gillet, refused to comment. She did say that two guns were recovered from Apperson’s car, one of which was .357 Magnum revolver. A handgun was also found in Zimmerman’s car.

4. Apperson Blew Smoke in a Reporter’s Camera When He Was Asked What Happened

Zimmerman was the only person injured in the incident, reports the Orlando Sentinel. The former neighborhood watch volunteer didn’t fire any weapon during the shooting. He was shot at. Apperson has not been charged with any crime yet. When asked, just after his release from police custody, by a WESH reporter about what happened, Apperson blew smoke in the camera. He didn’t speak until Apperson thought he had been touched, he said “Hey, you touching me? Stop touching me.”

The other car involved was Apperson’s Infinity, reports Click Orlando. Police are still trying to determine “how or why” the shooting happened.

5. It’s Just Another Day in the Life of George Zimmerman

This is just the latest bizarre incident involving Zimmerman since he was acquitted of murder after shooting black teenager Trayvon Martin dead. Just a few months after his acquittal in the 2013 trial, Zimmerman was pulled over for speeding in Texas. He told the officer that he had a gun in the car. The cop, after writing him up, told him “Don’t play with your firearm, OK?” Then, in November 2013, police were called to his girlfriend’s home in Apopka, Florida, after an alleged domestic violence incident, after being held on charges briefly, his girlfriend withdrew her accusations.

Earlier in 2015, the Department of Justice announced that no civil rights charges would be pursued against Zimmerman for the 2012 shooting in Sanford, Florida. Also in 2015, his girlfriend filed assault charges against him, she later recanted her allegations. 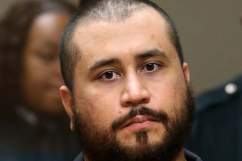 George Zimmerman ‘Shot in the Face’: 5 Fast Facts You Need to Know