Chris Christie and his wife, Mary Pat. in New Hampshire in April 2015. (Getty)

Chris Christie is the two-term governor of New Jersey and was previously the U.S. Attorney for the state after working for a few years as a private attorney. His wife, Mary Pat, is an investment banker.

According to the Washington Post, Christie and his family have an estimated net worth of $4 million.

Chris Christie earns a salary of $150,000 a year as New Jersey’s governor, a position he has served in since 2010. Christie is also given $95,000 in expense advances per year, paid quarterly by the state.

A report by Mendham-Chester Patch found that Christie spent $360,000 from his state allowance during his five years in office, with more than 80 percent of that to buy food, alcohol and desserts. The information came from a New Jersey Watchdog report released by the governor’s office.

He spent more than $80,000, on 58 occasions, for football games at MetLife Stadium, where the New York Giants and New York Jets play.

“The official nature and business purpose of the event remains the case regardless of whether the event is at the State House, Drumthwacket or a sporting venue,” Christie’s press secretary Kevin Roberts said in a statement.

2. His Wife Says She Has Always Been the ‘Breadwinner’ of the Family

New Jersey Governor Chris Christie and wife Mary Pat arrive for the State Dinner in honor of Chinese President Hu on January 19, 2011 at the white House in Washington, DC. (Getty)

“I’ve always been the breadwinner,” Mary Pat told Bloomberg in 2013. “I really just wanted him to be happy in his career, and he is.” 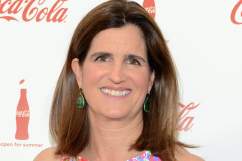 3. She Left Her Job at a Wall Street Hedge Fund as Her Husband Makes His Run for President

New Jersey Governor Chris Christie and his wife Mary Pat pose for a picture with a baby while they visit Belmar, two years after Hurricane Sandy on October 29, 2014. (Getty)

Mary Pat Christie left her high-paying Wall Street job in April as her husband made his final decision on whether to run for president. She was making $475,000 as managing director at the hedge fund Angelo, Gordon and Co., according to the Asbury Park Press.

“Mrs. Christie has decided to take a hiatus from her work in the finance world to spend more time with her family and young children,” Kevin Roberts, a spokesman for the governor’s office, told NJ.com.

She previously worked at the firm Cantor Fitzgerald.

In 2013, she said one of the reasons she worked after her husband became governor was to set an example for her children.

“One of the reasons I work is to be an example for my children – not that’s it’s the only path to take – but it’s really been instructional for my children, not just my daughters, but my sons too,” she told South Jersey Magazine. I’ve always been motivated to be happy and successful in my career regardless of what my husband may be focused on.”

The family’s home in Mendham Township, New Jersey, is worth an estimated $1.3 million, according to Trulia.com. They bought the house in 1998 for $775,000, according to Zillow.com.

The family lives in Mendham full-time instead of at the governor’s mansion, Drumthwacket, in Princeton.

“We’re not moving for the next four years. We are going to stay right in Morris County because it’s home for us,” Christie said at an event near his hometown in 2013, according to NJ.com.

5. Christie Says He Doesn’t Consider Himself to be Wealthy

Christie told a reporter from NJ.com in April that he doesn’t consider himself to be wealthy.

“No, I don’t,” Christie said, “I don’t consider myself a wealthy man. Listen, wealth is defined in a whole bunch of different ways and in the end Mary Pat and I have worked really hard, we have done well over the course of our lives, but, you know, we have four children to raise and a lot of things to do.”

NJ.com points out that “only eight-tenths of one percent of all U.S. households had an adjusted gross income over $500,000 in 2015, according to the Tax Policy Center, a non-partisan think-tank based in Washington.”

In New Jersey, according to the U.S. Census Bureau, the median household income is about $71,000.