Sergeant Carson Holmquist, 25, has been identified as one of the four Marines killed Thursday in the shooting at a military facility in Chattanooga, Tennessee, according to the Burnett County Sentinel.

Authorities say Mohammod Youssof Abdulazeez killed the Marines and wounded three others, including a member of the Navy and a police officer. Abdulazeez was also killed. The FBI is leading the investigation into the shooting.

Here’s what you need to know about Holmquist:

1. He Is a Wisconsin Native

Sergeant Holmquist is at right. Also pictured is Sergeant Dakota Meyer, who was awarded the Medal of Honor. (Facebook)

According to the Burnett County Sentinel, his hometown newspaper, Holmquist is from Grantsburg, Wisconsin.

“It’s a tough time right now,” his father, Tom Holmquist, told the Milwaukee Journal Sentinel. “He was fighting for his country.”

His mother, Susan, told KARE that military personnel came to their door at about 7 p.m. Thursday night to notify them of Holmquist’s death.

Scott Walker reacts to news that one of the Marines killed in Tennessee is from Wisconsin. He calls for a moment of prayer.

“Please keep our fallen Marines in Tennessee and their families in your thoughts and prayers,” General Joseph F. Dunford, Jr, Commandant of the Marine Corps, said in a statement. “Also pray for a speedy recovery of those wounded and affected by this tragedy. Our focus remains on supporting the families of our Marines.

The principal of Grantsburg Senior High School when Holmquist attended, Josh Watt, told KARE that it is a “tough day in Grantsburg,” which he called a “very patriotic community.”

Sgt Carson Holmquist killed in the #ChattanoogaShooting. His picture is on the Wall of Honor at Grantsburg High in WI pic.twitter.com/DdFET1PlCK

Watt, who was also the high school’s football coach, said Holmberg graduated from the high school in 2008 and played football there for four years, including as a starting defensive back in his final two seasons with the team. He said Holmberg was a sportsman who enjoyed fishing nad hunting.

“I vividly remember when he came back to the high school after boot camp,” Watt told the Associated Press. “He was dressed in his blues and very proud of his accomplishment to have become a Marine.” 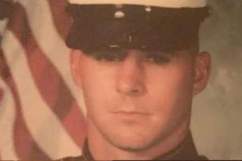 Carson Holmquist with his son, Wyatt, and wife, Jasmine. (Facebook)

Holmquist is survived by his wife, Jasmine, and his 2-year-old son, Wyatt, according to his Facebook page. 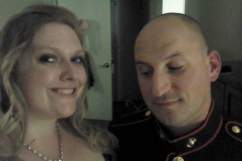 3.He Returned From an Overseas Deployment Last May, His Second Tour in Afghanistan

Holmquist’s wife and son greeted him when he returned home from an overseas deployment last July. (Facebook)

Holmquist served in Afghanistan twice during his time in the Marines, including a 244-day deployment that he returned home from last May.

He was previously stationed at Camp Lejeune in Jacksonville, North Carolina. 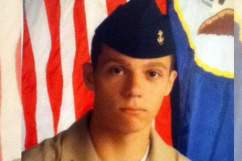 4. He Was a Technician Who Earned Several Honors

Holmquist was an automotive maintenance technician and earned several medals and honors, including the Navy Marine Corps Achievement, two Sea Service Deployment ribbons, the Afghanistan Campaign Medal and a Global War of Terrorism Service Medal, according to WQOW.

5. The 3 Other Slain Marines Have Also Been Identified

Zach, Zoe and Melissa Cates add to a makeshift memorial near the scene of a shooting at a Armed Forces Career Center/National Guard recruitment office. (Getty)

Wyatt, a 37, of Chattanooga, was the father of two children. Wells, 21, of Georgia, had recently enlisted in the Marine Corps. Sullivan, of Massachusetts, was a Purple Heart recipient who had been a Marine since 1997.

A fifth Marine was wounded in the shooting, along with a Navy sailor and Chattanooga Police Sergeant Dennis Pedigo.

All the victims were shot at the U.S. Naval Reserve Center on Amnicola Highway. The gunman had previously opened fire on a recruiting center about eight miles away, firing dozens of bullets into the building, but no one there was injured.

Read more about the shooting at the link below: 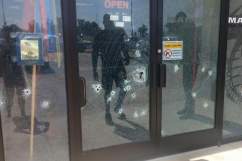 Loading more stories
wpDiscuz
3
0
Would love your thoughts, please comment.x
()
x
| Reply
Sergeant Carson Holmquist, of Granstburg, Wisconsin, has been identified as one of the four Marines killed in the shooting in Chattanooga, Tennessee.