The gunman, identified by the FBI as 24-year-oldMohammod Youssof Abdulazeez , was also killed. At least two others were injured, including one who is in critical condition. The officer, Sergeant Dennis Pedigo, is in stable condition.

The shootings were reported between 10 and 11 a.m. The situation was under control by about 1 p.m.

1. The Case Is Being Investigated by the FBI as ‘Domestic Terrorism’

Zach, Zoe and Melissa Cates add to a makeshift memorial near the scene of a shooting at a Armed Forces Career Center/National Guard recruitment office. (Getty)

The Justice Department said the shooting probe is a “national security” investigation that will be led by the FBI.

Chattanooga Police Chief Fred Fletcher said at a press conference “someone brutally and brazenly attacked members of our armed forces.”

"We believe it was a single shooter at this point. No reason to believe anyone else was involved." -Special Agent Ed Reinhold

The shooting started at the recruiting center on Lee Highway. The shooter then drove to another facility about eight miles away. The four Marines were killed there at a reserve recruiting and training facility on Amnicola Highway.

Local, county, state and federal law enforcement officers are investigating the shooting. Several hundred FBI resources are expected to be in Chattanooga to investigate.

The two military facilities are about 8 miles away from one another:

2. A Witness Said a White Male Fired Several Shots From a High-Powered Rifle

A woman who worked at a restaurant next to the recruiting office on Lee Highway told CNN she saw the shooting.

“I looked out of our window and I seen the guy in his car, a silver Mustang, drop top, a white guy and he had a high-powered rifle and was just firing shots into the Air Force, Navy and Marines office,” Gina Mule told CNN. “I don’t even know how many shots he fired, but it was a lot. … After he got done opening fire, he pulled out really quick.”

She said she saw one man who was shot in the back of the leg, but everyone else was fine other than that.

NOW: this is what we see right now outside the National Guard center. Police still carrying rifles pic.twitter.com/18cJS3rotf

One recruit, about to leave to be sworn into Air Force, barely missed a bullet but his backpack was grazed. pic.twitter.com/9mr90NXiQE

Man puts flowers down to remember the lives lost in shooting this morning.@WRCB pic.twitter.com/cc2LToOsy4

The other recruiting center is located on Highway near a Coca-Cola bottling plant.

Here's a picture sent from my girlfriends mom at Coke @WRCB pic.twitter.com/KJDQmgD12J 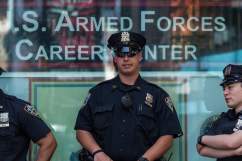 3. The Mayor Called It a ‘Horrific Incident’ & a ‘Nightmare’ for Chattanooga

Members of the FBI Evidence Response Team work the scene of a shooting at a Armed Forces Career Center/National Guard recruitment office. (Getty)

Chattanooga Mayor Andy Berke said at a press conference that the shooting is a “nightmare” for the city.

Horrific incident in our community. We will release details as they are confirmed. Prayers to all those affected

Tennessee Governor Bill Haslam said he was “sickened” and “saddened” by the tragedy.

Tennessee Gov. Bill Haslam: Lives have been lost from some faithful people who have been serving our country.

U.S. Senator Bob Corker, the city’s former mayor, talked about the shooting on the Senate floor:

President Obama has been briefed on the situation.

Schultz: POTUS "been briefed by his national security staff on the Chattanooga shooting, and will continue to get updates as warranted."

4. Several Businesses Were Locked Down as Panic Hit the City

The recruiting center on Lee Highway is located in a shopping center. Several businesses in the area near the Naval Reserve office were locked down or evacuated. The hospital where the wounded victims were taken was also on lock down, as was nearby Chattanooga State University.

Several police vehicles could be seen on Amnicola Highway at about 10:20 a.m., according to posts on social media. Traffic was shut down at the Du Pont exit, according to Peter Guarneri.

5. The Local Blood Bank Called for People to Donate to Help the Victims

A line was out the door at a Chattanooga blood bank after a call went out for donations, local news stations are reporting.

RT@HaasDeejay: The line is almost out the door for people wanting to donate blood. @bloodassurance @WRCB #chattanooga pic.twitter.com/y5hHD0urqQ

The Chattanooga Blood Assurance organization said there is an “urgent need for donors,” as shooting victims have required multiple units of blood.

Blood Assurance has send multiple units of blood to Erlanger; requesting donations to assist those who've been injured, shot.

Locations of Chattanooga area blood banks can be found here.