A Billings, Montana, polygamist is threatening to file a lawsuit after being denied a marriage license for his second wife after same-sex marriage was legalized.

Nathan Collier, 46, said Wednesday that the recent U.S. Supreme Court decision legalizing gay marriage nationwide inspired him to try to expand the definition of marriage to polygamy, according to the Associated Press.

1. He Applied for a Second Marriage License on Tuesday

Collier and his wives Victoria and Christine visited the Yellowstone County Courthouse on Tuesday in an attempt to legalize their polygamous marriage. Bigamy, or the holding of more than one marriage license, is illegal in Montana and all 50 states. There are penitential consequences for bigamy in the state. Montana State Law states:

(1) A person commits the offense of bigamy if, while married, the person knowingly contracts or purports to contract another marriage unless at the time of the subsequent marriage.
(2) A person convicted of bigamy shall be fined not to exceed $500 or be imprisoned in the county jail for any term not to exceed 6 months, or both.

The county clerk denied Collier’s marriage license request but told Collier that they would investigate his claims.

Collier and his wives had previously appeared on TLC’s hit show about a polygamous family Sister Wives. (Facebook)

Yellowstone County chief civil litigator Kevin Gillen told the Associated Press that he was reviewing Montana’s bigamy laws, stating: “I think he deserves an answer…[but] the law simply doesn’t provide for that yet.”

Gillen told Collier that he would have an answer for him by next week. According to Collier, he has also contacted the ACLU to ask for legal representation but ACLU legal director Jim Taylor has stated that he has received no such request yet.

Collier is already legally married to his first wife, Victoria. They married in 2000. He then married his second wife, Christine, in 2007 but only in a religious ceremony to avoid bigamy charges.

Collier is a former Mormon who was excommunicated from the church for his belief in polygamy. Between him and his two wives they have seven children from their unions and previous marriages.

4. They Appeared on TLC’s ‘Sister Wives’

Collier and his wives had previously appeared on TLC’s hit show about a polygamous family Sister Wives.

They were also recently featured on a segment by local new-station KTVQ. You can watch that interview above.

Rainbow colored lights shine on the White House to celebrate todays US Supreme Court ruling in favor of same-sex marriage June 26, 2015 in Washington, DC. Today the high court ruled 5-4 that the Constitution guarantees a right to same-sex marriage in all 50 states. (Photo by Mark Wilson/Getty Images)

Collier told the Associated Press: “It’s about marriage equality… You can’t have [gay marriage] without polygamy.” 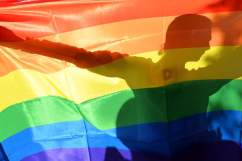 Loading more stories
wpDiscuz
8
0
Would love your thoughts, please comment.x
()
x
| Reply
A Billings, Montana polygamist is threatening to file a lawsuit after being denied a marriage license for his second wife after same-sex marriage was legalized.