A Bloods gang Godfather who had just written “Today I Die” on Facebook was killed by the NYPD after he tried to burn down his house rather than let cops arrest him. The standoff began when U.S. Marshals went to Garland Tyree’s home in Staten Island to serve him with a warrant for a probation violation at around 6 a.m. on August 14. Less than six hours later, Tyree was killed in a hail of NYPD SWAT Team gunfire. Prior to dying, officers flew his mother up from Delaware, she was able to speak to her son. Tyree told her that he would surrender, shortly afterward, he was dead.

1. Police Say Tyree Shot a Firefighter Who Came to Help Him

Mayor De Blasio meeting with fire department officials after the shooting. Lt. Jimmy Hayes is the first firefighter to be shot in the line of duty in 21 years. (FDNY)

Tyree refused to let U.S. Marshals into his home and barricaded himself inside. Then, police say he set fire to his home at 15 Destiny Court in Mariners Harbor, Staten Island, just after officers tried to gain entry by force. The Staten Island Advocate reports that Tyree then allegedly shot a responding firefighter twice. The fire was extinguished at 7:40 a.m. Speaking to DNA Info during the standoff, Tyree said “I don’t know what they want. They just kicked in my door.” He added “I’m a person that takes life as it comes. It is what it is…I’m at peace.” At around 11:45 a.m. the New York Post reports that Tyree came out of his home shooting, clad in a bullet-proof vest, he was in turn shot dead by the NYPD. No officers are believed to have been wounded.

The wounded firefighter has been named as 54-year-old Lt. Jimmy Hayes. He’s in serious but stable condition and has been visited by New York City Mayor Bill De Blasio, though the mayor has been criticized for being in the gym while getting updates on the standoff. Fox New York reports that Tyree’s girlfriend as well as other friends and family went to the scene of the shooting to plead with Tyree to surrender peacefully.

Mother of Garland Tyree comes to scene and angry at outcome of standoff where police shot and killed son. pic.twitter.com/iMk09G7evE

2. Tyree Had Been Arrested 18 Times & Had Undergone Numerous Rehab Programs in Prison

He had 18 arrests on his record, including arrests for gun and drug possession, as well as beating an inmate while in prison in 2006, reports the Staten Island Advocate. His first charge goes back to 1993 when he did time for assault and weapons possession charges. Tyree was released from prison for those offenses in July 2002. He was last released on parole in July 2014. Just two weeks ago he posted a photo to his Instagram showing a news report from an arrest in 1993 when he was just 16. In that case, he was accused of shooting dead a rival but was adjudged to have acted in self defense, though he did get sentenced on a gun charge in the case. During his time in the Bloods, Tyree rose to the rank of Godfather.

DNA Info reports that in 2010 he completed two Bureau of Prison’s rehabilitation programs. While he was incarcerated, Tyree helped other inmates study for their GEDs and completed a law library training course. In an interview posted to YouTube in 2014 (above), Tyree explained how he got out of prison in July of that year. He said “I was focused. I knew that there was no going back for me. I knew that going back meant a life sentence.” Tyree also talked about what the gang lifestyle means to him:

Gangs for us are what fraternities are for people that grow up differently. I’m trying to get my homies as well as other people’s homies to see that this unity, it’s about more than just chilling and drinking and smoking together and hustling together. It’s about using that unity to better ourselves…My mom raised me right. She always told me I’m never going to get a fair shake in this country. So, I just try harder and push harder.

3. Since Getting Out of Prison, Tyree Has Been Trying to Make it as a Writer

Tyree pictured on his Instagram page, notice the initials NTG tattooed on his face. Those are the same initials of the Bloods gang Nine Trey Gangsters. (Instagram)

According to his Facebook page, Tyree is the CEO and founder of Real Write Publishing. He says he went to CUNY on Staten Island. On his LinkedIn, he says he attained a BA in Sociology and Anthropology. Real Write Publishing is “dedicated to bringing you realistic Urban Fiction, filled with action, drama and most of all thought provoking material.” You can buy one of his books here. One review of the book read “I cannot put this book down for reall !!!!! so far you got 5 stars on your hands baby!”

4. He Was a Fan of Black Nationalism & Was a Member of a Young Democrats Club

Garland is a fan of Mutulu Shakur, who was once on the FBI’s Ten Most Wanted List. (Wikipedia)

On his Facebook page, Tyree writes about his his belief in black nationalism, particularly his love of Mutulu Shakur. Shakur had been in prison since 1986 on charges of robbing a Brinks armored truck in 1981 which resulted in the deaths of two police officers, Edward O’Grady and Waverly Brown. Shakur was also the stepfather to 2Pac. On his LinkedIn page, Tyree says he’s a member of the South East Queens County Young Democrats as well as being a youth organizer.

5. Tyree’s Bloods Set Are Tied to the Lucchese Mafia Family

Police have said that Tyree is a member of the Nine Trey Gangster Bloods set in New York City. In 2007, the office of the Attorney General named that gang as associates of the notorious Lucchese mafia family. The New York Post reports that the most dangers set of the notorious Bloods gang in New York are known as the Mac Baller Brims. Though based in The Bronx, the gang has a large criminal presence in Staten Island. The Bloods began in New York in 1993 in Riker’s Island prison. You can watch a documentary about the gang in New York above. 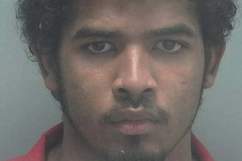 Read More
5 Fast Facts, Breaking News, Crime
A Bloods gang Godfather who had just written "Today I Die" on Facebook was killed by the NYPD after he tried to burn down his house rather than let cops arrest him.