The son of Atlanta’s first female mayor has died at the age of 41. Cabral Franklin, the son of former Mayor Shirley Franklin, was reported dead on the afternoon of September 15. He passed away after a battle with cancer.

1. He Was an ‘Experienced & Political Consultant’

How is the lord just going to take away Cabral Franklin like that? He was one of the nicest guys I know. Why GOD?

According to his LinkedIn page, Franklin was an “experienced business and political consultant.” He was a graduate at Georgia State University and Morehouse College, his mother’s alma-mater. Prior to working for himself, Franklin worked at his father, David’s, business Franklin & Wilson Airport Concessions. A company which filed for bankruptcy in 2007.

2. He Was a Campaign Co-Ordinator for Atlanta’s Current Mayor

On the website for Franklin Communications, Franklin was the managing partner for Franklin Communications. The business specialized in providing political advice and strategy for candidates. He writes on his profile “His love for politics began as a youngster listening to his parents debate current political events at the dinner table.” One online profile lists him as a campaigner for current Atlanta Mayor Kasim Reed.

He lived in Atlanta with his wife and two daughters. The Atlanta Journal-Constitution reports that his wife is Atlanta political fundraiser Candice Franklin. One of his friends, Raynard Johnson, told the paper “He was a great guy with big visions.” He was a childhood friend of Atlanta City Council member Andre Dickens.

4. He Was Working With His Mother Since She Left Office

Atlanta being the business hub of S. America, instead of Miami, is like making LA a West Coast gambling hub instead of Vegas #commonsense

In 2011, just a few months after leaving office, Shirley Franklin began working with her son on a blogging venture to engage more young people in politics, reports CBS Atlanta. Since her time as mayor ended, Shirley Franklin has worked as a Cosby Endowed Professor, named for patron, disgraced comedian Bill Cosby, as well as working for the National Center for Civil and Human Rights as Chairman, according to her LinkedIn page.

5. His Lineage Could Be Traced to Guinea-Bissau & Sierra Leone

His lineage can be traced back to Guinea-Bissau and Sierra Leone. Franklin’s mother found out her lineage back in 2008 spearheaded by President Obama’s mission to find out his ancestry. Other celebrities who were traced along with Franklin included Maya Angelou, Morgan Freeman and Oprah Winfrey. 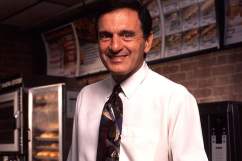 Loading more stories
wpDiscuz
0
0
Would love your thoughts, please comment.x
()
x
| Reply
The son of Atlanta's first female mayor has died at the age of 41.