A woman is accused of plotting and killing her husband and his mistress. According to police Lothian, Maryland, Ann Marie Anastasia, is accused of hatching the plot along with her daughter’s boyfriend, Gabriel Ezekiel Struss, 18, of Annapolis. Her 13-year-old daughter, Sara Anastasi, has also been arrested in connection to the killings of Anastasia’s husband Anthony Joseph Anastasi, 40, and Jacqueline Irene Riggs, 25.

1. Riggs Lived in the Same Home With Anastasia & Her Husband

Documents in the case state that on October 5, police in Lothian, Maryland, were called to Anastasia’s home on the 600 block of West Bay Front. There, they found Anthony Joseph Anastasi Jr, 40, dead of a gun shot wound. He was pronounced dead at the scene. In the basement of the home, responding officers then found 25-year-old Jacqueline Irene Riggs dead of stab wounds, she was also pronounced dead. Upon investigating, detectives learned that Anastasia, Anastasi and Riggs had been involved in a threesome relationship. In the summer of 2015, Riggs moved into the family home, this caused a strain on the marriage of Anastasia and Anastasi. Police believe this is when Anastasia conspired with her daughter and her 18-year-old boyfriend Gabriel Struss to kill Anthony Anastasi and Riggs.

Original interviews carried out with Anastasia and Sara Anastasia indicated that Anastasi had committed suicide. He had been found with a gun shot wound to his chest. Documents say that next to his body was a .45 caliber handgun as well as a shell casing for a .380. After the initial interviews, and inconsistencies in the stories from Struss, Anastasia and Sara Anastasia, through forensics, officers determined that the .45 didn’t fire the fatal bullet. The documents state “This would suggest that Anthony’s death was not a suicide.”

3. Her Marriage Had Been ‘Fraught With Conflict & Domestic Abuse’

The charging documents read that Ann Marie Anastasi and Anthony Anastasia had been married for 18 years but their marriage had been “fraught with conflict and domestic abuse.” Those documents refer to Riggs as an “associate” of the family.

4. Struss Wanted Sara Anastasi to Take ‘the Fall’ for the Murder

In text messages sent the night before Anthony Anastasi and Riggs were killed, Struss text Sara Anastasi to warn her not to talk to police or else he “would be going to jail for life.” In those text messages, Struss did “specifically mention in slang terms bringing a weapon to the scene to harm two persons.” Later Struss discussed, via text, the possibility of Sara Anastasi taking “the ‘fall’ or blame” for the murder on behalf of Struss. Speaking to ABC 7’s Suzanne Kennedy, Struss’ brother said “That’s not something you would see him doing.” Meanwhile his grandfather told Kennedy “It’s crazy. I didn’t think that boy would do nothing like this.”

5. In May 2013, Maryland Abolished the Death Penalty 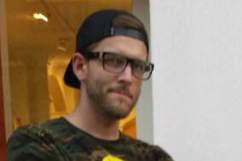 Read More
5 Fast Facts, Breaking News, Crime, Weird News
Follow Heavy ↓
A woman is accused of plotting and killing her husband and his mistress. According to police Lothian, Maryland, Ann Marie Anastasia, is accused of hatching the plot along with her daughter's boyfriend, Gabriel Ezekiel Struss, 18, of Annapolis.