Deputy Ben Fields, the Richland County, South Carolina, police officer under fire after a video went viral showing him throwing a high school student from her desk at Spring Valley High School, has been sued twice in federal court.

Fields has been placed on administrative duty while the video is investigated. You can watch the video and read more about Fields here.

One of the lawsuits is still pending with a jury trial set for January 2016. The other lawsuit went to a jury, which found in favor of Fields.

Fields Was Accused of Attacking a Man Over a Noise Complaint

Fields was first sued in federal court in 2007 from his time as a patrol deputy in 2005. A jury eventually ruled in Fields’ favor. Read that complaint above.

In that lawsuit, Fields was accused of violating the civil rights of a man and woman at an apartment complex in Columbia. The plaintiff, Carlos Martin, says was driving his car near his home and saw a police officer driving his cruiser in the parking lot. He said he nodded to the officer “as a friendly gesture and greeting.”

Martin said shortly after he parked his car and was walking to his apartment. He says he then heard the officer, later identified as Fields, running toward him calling, “Hey you.” Fields asked for Martin’s license and registration and asked if he was the cause of excessive noise that a resident had complained about. Martin told Fields he wasn’t the source and had just got home from work.

According to the lawsuit, Fields later seized a cell phone from Martin’s wife, Tashiana Anita Martin, who recorded the incident on video and never returned to her. He also arrested her. The charges against both were later dropped when the prosecution failed to show up for court.

Fields, in his reply to the lawsuit, said Martin was playing excessively loud music from his vehicle, and he was going to cite him for that before Martin become boisterous and used profanity toward Fields. He said Martin pulled away when he tried to handcuff him, and then started kicking him, so he used force to arrest him.

Also, according to the lawsuit, Fields “made ridiculing and suggestive comments that he was going to take Plaintiff Tashiana Anita Martin to a Motel 6.” He denied that claim.

A student is currently suing Deputy Fields over an incident that occurred in 2013. That lawsuit, which you can read above, is set to go to trial in January 2016.

The student, Ashton James Reese, was expelled from the high school for “unlawful assembly of gang activity and assault and battery,” in 2013. He was accused of participating in a “gang related” fight in a Walmart parking lot near the school.

Fields, who did not respond to the fight, led the investigation, and described it as a “huge gang fight,” that was an attempt to unite three gangs at the school. He said Reese was identified as being in the video and being part of a gang. But Reese denies he is a gang member, according to the lawsuit. 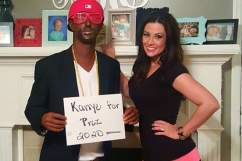