Chris Harper Mercer’s mom tried to help him with his emotional problems. (MySpace)

Who is Chris Harper Mercer’s family? Mercer was identified as the gunman who killed 10 people at Umpqua Community College in Roseburg, Oregon. He was an angry man, armed with guns and body armor, who asked students to state their religion before he fired on them. The 26-year-old said on his dating profile that he was mixed race and stated on his blog that he sympathized with police officers rather than Black Lives Matter. Who were his family members and what did they think of Mercer’s beliefs?

Mercer May Have Been Born in England

According to CBS Los Angeles, Mercer’s step-sister said that he was born in England. He moved to the United States when he was a very young boy.

Mercer’s Mother Tried to Raise Him to Respect Life

Mercer’s mother, Laurel Harper, is a certified nurse practitioner who had lived Torrance, California but moved to Winchester, Oregon with Mercer around 2013. Mercer lived with her on a ground floor apartment in Torrance, California from 2011 to 2013, The Daily Bulletin reported. An article from 1993 referenced a woman with her same name saying that she used to bring her young son, Christopher Harper-Mercer, to nature shows in California so he could experience nature and feel responsible for it.

Neighbors in California said that Mercer and his mother kept mostly to themselves, the Los Angeles Times reported. His mom would sometimes get involved with the community, such as circulating a petition about eradicating a cockroach infestation because it was keeping her son up at night. One neighbor said that she called him “baby” all the time, even though he was an adult.

Mercer’s mother seemed conscientious about what other people thought. She posted this response to comments on an article on the Nursing Center website, saying that using the terms “fetal tissue” and “products of conception” were fine when it came to a professional article. She added that the terms were not preferable when talking to a patient who had suffered a miscarriage. Using such terms doesn’t desensitize nurses, she said, but simply helps nurses from becoming too emotionally involved with patients’ grief.

In what may be her Facebook page, but is still awaiting confirmation, she entered a sweepstakes contest a couple years ago and said that she would use the money to help deserving students attend college, and use a little of the leftovers for her retirement.

You can read more about Laurel Harper at the link below: 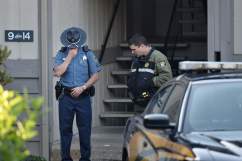 His Father Said That He’s in Shock

Mercer’s father has been identified by some news sources as Ian Mercer and by others as Ian Harper. He lives in Tarzana, California, CBS Los Angeles reported, and said he was shocked by what happened. “It’s been a devastating, devastating day for me and my family,” he told CBS. The Los Angeles Times reported that he had spent all day talking with law enforcement about his son and answering questions.

While Chris Harper Mercer lived in Torrance, he attended and graduated from a high school, Switzer Learning Center, that specialized in helping teens with emotional problems and learning disabilities, The Daily Breeze reported.

Loading more stories
wpDiscuz
46
0
Would love your thoughts, please comment.x
()
x
| Reply
As details emerge about Chris Harper Mercer, we're learning about his family. His mom is a nurse who wanted him to love nature. His father's still in shock.