Several passengers were injured after a plane caught fire while taxiing for departure at Fort Lauderdale-Hollywood International Airport in Florida, officials say.

Dynamic International Airways Flight 405, a Boeing 767 headed to Caracas, Venezuela, was evacuated after the pilot of another plane reported that it was on fire, the Sun-Sentinel reports.

The fire, which started in the plane’s left engine, occurred about 12:30 p.m.

1. The Fire & Evacuation Left 14 Injured, With 1 Person Suffering From Burns

Passengers fled from the burning plane via slides onto the taxiway. One of the passengers took the above video after leaving the plane.

“They got us off in an emergency. The plane is burning. It’s really burning,” she says in Spanish.

Fourteen people on the plane were taken to the hospital with injuries as a result of the fire and the evacuation process, the Broward County Sheriff’s Office told WSVN-TV. Another 24 are being examined at the scene.

Rescue officials said the most serious injury was a burn, while two others had less serious injuries and the others suffered minor injuries.

There were 101 passengers and crew on board the plane. 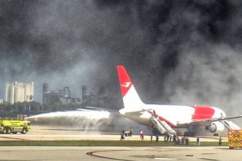 An aircraft that was behind the plane reported the fire and said the plane was leaking fuel before the flames were spotted, the FAA told the Sun-Sentinel.

In audio provided by LiveATC.net to The Associated Press (listen above), the pilot of the other plane, told air traffic controllers, “Hey, uh, Dynamic is, out of the left engine, it looks like it’s leaking a lot of … I don’t know if it’s fuel, it’s fluid leaking out of the live engine.

The Dynamic Airways pilot replied, “We copy. We’ll probably need to go back to the ramp.”

There are still many questions about what occurred.

“I’m told one of the engines caught fire as the plane was taxiing, getting ready for departure,” airport spokesperson Greg Meyer told WSVN-TV. “I don’t know the number of people on board, and I don’t know the condition of the people, but I was told the fire was put out by a fire rescue team on site.”

3. The Cause of the Fire Is Under Investigation

The National Transportation Safety Board said the cause of the fire is now under investigation.

A four-person team will be sent by the NTSB to Fort Lauderdale to lead the probe.

According to NBC News, the Boeing 767 plane is almost 30 years old.

Dynamic Airways said in a press release in June that the Boeing plane’s interior was “retrofitted to enhance the premium experience on international flights.”

Plane on fire at FLL pic.twitter.com/VpD8f8Oe3H

Dynamic Airways, based in Greensboro, North Carolina, was founded in 2010. The airline has not yet commented.

The non-stop flight from Fort Lauderdale to Venezuela began in June, according to a press release.

“Venezuela is a key market for Dynamic,” Bill Grey, Dynamic’s chief marketing officer said in a statement. “This new route gives our customers direct daily access between these two key markets for the first time and will also provide customers with highly demanded low cost service from South Florida to Caracas and further.”

Dynamic is currently expanding, the company said in a press release. It also offers flights in New York, Guyana, Hong Kong and Palau.

The fire is the first major incident involving the airline, according to NTSB records obtained by the Sun-Sentinel. 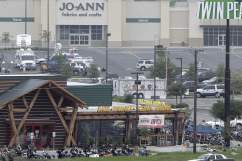