Video of a drunk 19-year-old UConn student verbally berating and then shoving the manager of an on-campus food market who wouldn’t let him get mac and cheese has gone viral.

Luke Gatti, of Bayville, Long Island, was eventually taken down to the ground by another staff member of the Union Street Market and arrested by University of Connecticut campus police. The incident happened around 10 p.m. Sunday night, and was posted online Monday evening.

Gatti, who was arrested twice last year while he was a student at the University of Massachusetts, was angry because he wasn’t being allowed into the market, where he wanted to buy bacon macaroni and cheese. The video, which is nine minutes long and can be watched above, shows Gatti screaming at the manager and other employees, demanding that he be allowed to buy the mac and cheese. At one point, the unnamed manager tells him to “try Subway”, because he wasn’t welcome there.

Gatti, wearing sweatpants, a sweatshirt and sandals with socks, tells the manager, “This is getting posted somewhere and you’re gonna look like a f*****g tool,” when he sees they are being recorded.

Here’s what you need to know about Gatti:

1. The Viral Tantrum Started After the Manager Wouldn’t Let Him Bring Beer Into the Market

Luke Gatti was charged with breach of peace and trespassing. (UConn Police)

The manager explains in the video that he wouldn’t let Gatti in to the Union Street Market because he tried to bring in an open beer.

For several minutes, Gatti yelled that he wanted bacon jalapeno mac and cheese, and screamed insults at the manager, calling him a “f*g,” and a “f****g idiot.” During the video, the manager shows extreme patience, trying to get Gatti to leave on his own before police arrive. Others also try to intervene, including fellow students and another cafeteria worker, who tells Gatti to take it outside.

A drunk UConn student ended up in handcuffs after screaming at the Student Union manager because he wasn’t able to get macaroni and cheese. (YouTube screenshot)

Eventually, Gatti becomes overheated and shoves the manager. An employee in a chef’s hat had enough, coming to his boss’s aid and taking Gatti down to the ground.

The manager and the other employee then held the student down until police arrived, handcuffed him and dragged him out of the building. As he was being handcuffed and reality seemed to finally set in, he cried out, “I’m absolutely f****d!” 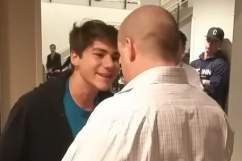 2. Gatti Was Charged With Breach of Peace & Trespassing

Gatti was eventually cuffed and dragged out of the building by a UConn police officer. (YouTube screenshot)

Gatti was charged with second-degree breach of peace and criminal trespass, the Hartford Courant reports. He is due in court in October.

Police were called to the Union Street Market at about 10 p.m. Sunday night, with a 911 caller saying a disturbance had now turned physical.

“Upon arrival police saw Gatti being detained by Union Street Market employees,” the police report said, according to the Courant. “Police took Gatti into custody and learned through statements that Gatti had been refused service due to drinking alcohol in the market. After being told to leave several times, Gatti refused and became verbally and physically abusive with staff. Gatti shoved the manager several times before he was detained by staff.”

He also faces disciplinary action, ranging from a suspension to expulsion, from the university, which said it can’t comment on specific cases.

Luke Gatti in a mugshot from a 2014 arrest. (Amherst Police Department)

Gatti was arrested twice in two weeks last September when he was a student at the University of Massachusetts in Amherst.

On September 1, 2014, Gatti was arrested and charged with disorderly conduct after throwing a “temper tantrum” when he was told to move out of the street by police, the blog Only in the Republic of Amherst reported. According to the police report, Gatti “raised his left hand in a ‘Hook-em-horns-‘ like gesture and shouted f**k you n****r” at an officer. Police said he then yelled “I said f*** you, so f*** you” at the officer and “began to flail his arms and jump up and down.” He was ordered to pay a $100 fine and put on probation for four months.

He was back in court on September 15 after he was arrested for allegedly causing a scene when police were trying to break up a loud party. MassLive.com reported at the time that Gatti was charged with disorderly conduct and assault and battery on a police officer.

Police said when they arrived at the party, Gatti “was repeatedly screaming ‘F**k you! F**k you, you f*****g asshole pig!’ while gesturing his middle fingers with both hands at Officer Harris.” Gatti was taken into custody and to police headquarters. When the officers tried to get him out of their transport vehicle he, “kicked Sgt. (redacted) striking him in the leg with his foot.”

An officer suffered a hand and arm injury during that incident. The outcome of that case wasn’t immediately available.

4. He Is a Competitive Skier & a Mets Fan From Long Island, New York

According to his now-deleted Facebook page, Gatti, of Bayville, New York, which is on Long Island, is a fan of the New York Mets and a competitive skier. He was expecting to be a member of UConn’s ski team, but his name has now been removed from the team’s roster.

Before he deleted it, his page was filled with photos of him skiing.

A local pizza place named a calzone after Gatti after the story went viral:

Gatti, a freshman, has not responded to requests for comment from Heavy.com and other news outlets. It’s not yet known if he has an attorney.

After his arrests at UMass, he told the blog Only in the Republic of Amherst in an email, “The case is still open and it would be imprudent for the media to report on it before all the information is presented in a court of law. While I fully support freedom of speech, I think this is a manipulative practice and should be illegal. And as far as I know, you have already published speculation regarding my case as fact without even using the word allegedly and I really don’t appreciate it.”

Before college, Gatti worked in the kitchen staff at Mount Hood’s ski, according to his Facebook page and the camp’s website.

“Luke is a ski eracer from Bayville, NY. Luke’s favorite website is mthood.com and favorite foods include sick-nic burgers and Calamari. He roots for the New York Mets and also enjoys playing guitar, drums and playing sports with friends. Luke started working at camp in 2013,” his bio on the camp’s website says.

He attended high school at the Killington Mountain School in Vermont, which has now deleted references to him from its website.

5. He Apologized in a YouTube Video a Week After the Incident

He said the manager, “was just doing his job. He gave me so many chances to walk away. And I didn’t listen to him. No one deserves to be treated that way, like ever.”

Gatti said he watched the video several days later, and “I couldn’t even believe it was me in it. I was watching it and thinking, ‘Oh my God. What the hell’s wrong with me. This is not what I’m all about. I don’t treat people this way.'”

“I’ve got some problems I am addressing. This was seriously a wake-up call,” Gatti said in the video.

Gatti’s father, Vincent, told the Hartford Courant his family, “”been hit with a barrage of yelling, screaming, cursing, obnoxious, horrible, hateful, spiteful people berating me and my son for screaming and cursing and berating a stranger. There’s been a world full of people doing exactly what my son did and feeling justified in doing so.”

Luke Gatti said people have been sending him mac and cheese. He asked that people donate it to a food pantry instead.

Loading more stories
wpDiscuz
170
0
Would love your thoughts, please comment.x
()
x
| Reply
A UConn student was arrested Sunday night after he drunkenly berated and shoved a student union manager who wouldn't let him have mac and cheese. The video went viral.