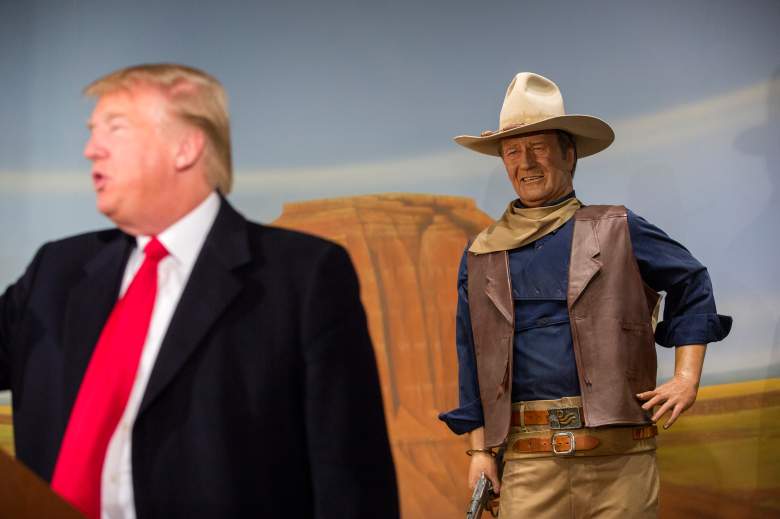 Donald Trump, here at the John Wayne Birthplace Museum in Iowa, is close in that state’s polls and got a key endorsement Tuesday. (Getty)

There are only 11 days until the Iowa caucus, and the campaign trail is heating up. Ted Cruz and Donald Trump each have polling leads in Iowa, though Cruz’s lead is in the more highly regarded poll. Meanwhile, Marco Rubio runs third. Trump leads nationally, with New Hampshire showing a strong Trump lead and Rubio losing ground in the runner-up race to John Kasich in New Hampshire.

Two big events took place Tuesday: 2008 Republican Vice Presidential candidate Sarah Palin endorsed Trump, as seen in the video above, and Iowa governor Terry Branstad did the opposite for Cruz, saying in a press conference, “It would be a “big mistake for Iowa to support him.” However, no new polls have measured the impact of Palin or Branstad’s statements.

The Des Moines Register Iowa Poll shows a 3-point Cruz lead over Trump, 25 percent to 22 percent, with Rubio at 12 percent and Ben Carson at 11. Though it’s known as Iowa’s most accurate poll, two others from the same period, by Gravis and Public Policy Polling, both favor Trump.

An interesting result from recent Iowa polling: Cruz appears to do better in larger polls. ARG and Gravis, which sampled 400 and 422 voters, Trump had leads of 6 and 4 points. However, Public Policy Polling (530) has Cruz just 2 points back and the Des Moines Register (500) has him up 3.

The RealClearPolitics averages show Trump with a 0.4-point lead over Cruz at 27.3 to 26.9 percent, with Rubio running third at 11.9 percent and Carson fourth at 9.

FiveThirtyEight, which takes more than polls into account for its “polls-plus” forecast, shows Cruz with a 50 percent chance of taking Iowa, down from 51 percent, likely due to the endorsements, which weigh heavily in the model. Trump stays at at 29 percent, with Rubio at 14. The polls-only forecast, which weights polls based on methodology and past accuracy, favors Trump with a 44 percent chance, compared to 42 for Cruz and single digits for everyone else.

The betting markets as aggregated by Predictwise shows Cruz dropping to 55 percent, setting a new low for the month of January. Trump marks a new high at 40 percent, with Rubio taking 4 percent and Jeb Bush at 1.