Non-emergency vehicles were required to be off the roads by 2:30 p.m. Saturday Drivers who defy the ban can face large fines and police say they will be strictly enforcing the law:

After 2:30 p.m and you're on the road, we will arrest you @NYPDChiefofDept says

Cuomo said the travel ban will be lifted at 7 a.m. Sunday. The storm is expected to continue through Saturday night.

The “blizzard of 2016” is expected to bring 20 to 25 inches of snow to the New York City area, with wind gusts up to 50 mph and low visibility, the National Weather Service says.

Above-ground subways stopped running at 4 p.m., the MTA said. Below-ground trains will continue through the storm.

“This is a major storm, and travel conditions throughout downstate New York are dangerous,” Cuomo said in a statement. “We are doing everything possible to keep the roads and mass transit operational, but unless there is an emergency people should not be traveling. We are responding aggressively as the storm develops and working hand-in-hand with our local partners to keep communities safe. I urge all New Yorkers to stay home, stay warm, and allow our emergency personnel to do their jobs.”

Cuomo has declared a state of emergency for New York City and Long Island along with Westchester, Rockland, Orange and Putnam counties.

New Jersey Governor Chris Christie has also declared a state of emergency, but has not issued a travel ban. He has urged residents to stay off the roads.

New Jersey Transit shut down at 2 a.m. Saturday. Christie says he hope to have public transportation running in his state by Monday morning. 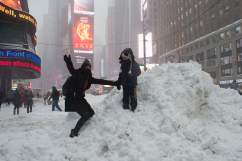