The hashtag #OregonUnderAttack has been trending worldwide for more than 12 hours after a group of armed men seized an unoccupied federal building on a wildlife reserve in rural Oregon.

The group, led by Cliven Bundy’s sons Ammon and Ryan, is protesting the pending imprisonment of cattle ranchers Dwight and Steven Hammond, who were convicted of burning federal land to protect their grazing area. The armed men took over the Malheur National Wildife Refuge in rural eastern Oregon.

“The best possible outcome is that the ranchers that have been kicked out of the area, then they will come back and reclaim their land, and the wildlife refuge will be shut down forever and the federal government will relinquish such control,” Ryan Bundy told The Oregonian. “What we’re doing is not rebellious. What we’re doing is in accordance with the Constitution, which is the supreme law of the land.”

Most of the tweets using the Oregon Under Attack hashtag have called out the lack of mainstream media coverage for the takeover, and the double standard shown by police, politicians and journalists compared to the way Black Lives Matter protests are handled.

The hashtag was started by Elon James White, the CEO of ThisWeekinBlackness.com:

White People must take responsibility and find these terrorists in your communities. #OregonUnderAttack

The first hashtag was #OregonStandoff. I didn't think that actually captured what was happening. If PoC did this it'd be #OregonUnderAttack

Articles are talking about "hyperbole" and not getting the real point of #OregonUnderAttack. #BLM has been demonized for so much less.

Here are some of the other tweets you need to see:

Seems like the only difference between a "militia" and a "terrorist group" is the color of their skin. #OregonUnderAttack

Wait, men are playing in a park with actual real guns? #TamirRice #OregonUnderAttack

#OregonUnderAttack shows you White Entitlement in all it's glory. Who else stages armed insurgency to take back land their ancestors stole?

For folks who need a starker comparison of the double standard here, I present exhibit A #OregonUnderAttack pic.twitter.com/f4IITVg75b

Did I miss the call for the national guard in Oregon? I recall them in Ferguson and Baltimore. #OregonUnderAttack

Stop and imagine the government reaction if #OregonUnderAttack would've been African-American activists, Muslims, or anyone else

Without Twitter i wouldn't know about #oregonunderattack .. How is this not breaking news @CNN ?

.@elonjames @dantebarry where are the white moderates denouncing their entire community's terrorism? #OregonUnderAttack

Read more about Ammon Bundy and the federal building takeover at the link below: 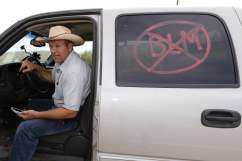 Loading more stories
wpDiscuz
8
0
Would love your thoughts, please comment.x
()
x
| Reply
The hashtag #OregonUnderAttack has been trending worldwide as Twitter users slam the double standard surrounding the takeover of a federal building in Oregon.