1,400 employees gathered around a company spokesman for Carrier Air Conditioner, part of United Technologies, to find out that they are all being let go so production can move to Monterrey, Mexico. The video was shared by Redditor LegendaryContent and links to the YouTube account “Joe Brunner.”

It is unknown if either of them have any affiliation to Carrier Air Conditioner or simply shared the video.

In the video, a company spokesman informs the gathered employees that in order for Carrier Air Conditioner to “stay competitive and protect the business for long term” that production will be moving from Indianapolis, Indiana to Monterrey, Mexico starting in 2017.

“This move is intended to address the challenges we continue to face in a rapidly changing HVAC industry, with the continued migration of the HVAC industry to Mexico, including our suppliers and competitors, and ongoing cost and pricing pressures driven, in part, by new regulatory requirements.

“Relocating our operations to a region where we have existing infrastructure and a strong supplier base will allow us to operate more cost effectively so that we can continue to produce high-quality HVAC products that are competitively positioned while continuing to meet customer needs.

“This decision is difficult and we recognize the impact on employees, their families and the community. We are committed to ensuring that our employees are treated respectfully and to working closely with their representatives throughout this transition.”

American manufacturing jobs have continually been moving to places of cheaper production like Mexico and it is a point of contention for many Americans this 2016 presidential. According to Real Clear Politics, jobs being sent overseas may explain the rise of candidates like Donald Trump. 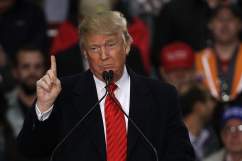 Read More
Jobs, Mexico, United States, Youtube
wpDiscuz
3
0
Would love your thoughts, please comment.x
()
x
| Reply
1,400 employees gathered around a company spokesman for Carrier Air Conditioner, part of United Technologies, to find out that they are all being let go so production can move to Monterrey, Mexico.