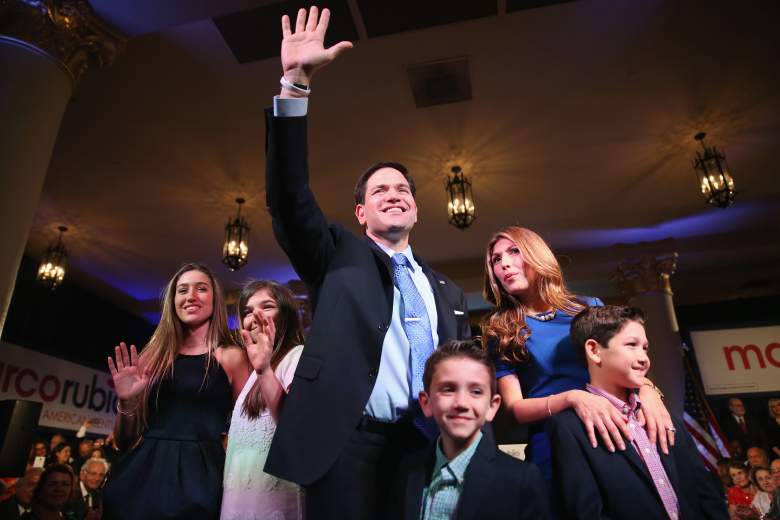 Rubio’s four children have been the focus of his life for years, even with his political aspirations. (Getty)

Marco Rubio is a front-runner for the Republican nomination, a prominent political figure and, most importantly, a father.

The Florida senator is a dad to four children with his wife Jeanette and the pair have made sure, no matter where they may be on the campaign trail, to keep their children at the forefront of everything they do.

In fact, a good chunk of Rubio’s political decisions over the years have been shaped by his family and his hope of spending as much time as possible with his children.

Read on to learn more about Rubio and his family:

1. Rubio Has Four Children With Jeanette

Rubio and his family have been out on the campaign trail for months criss-crossing the entire country. (Getty)

After Marco and Jeanette tied the knot, following a proposal at the top of the Empire State Building no less, the Rubios focused on start a family of their own.

Now, they’re parents to four children; twos sons and two daughters. Amanda (15), Daniella (13), Anthony (9) and Dominic (7) have all joined their father on the campaign trail and, now, are sharing some of the spotlight as the rest of the country seeks information on Rubio’s family life. 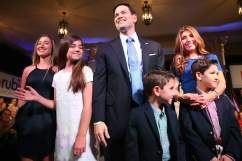 2. The Family Still Lives Where Rubio Grew Up – 10 Minutes Away From His Mother

Rubio’s mother lives just a few minutes away from his family and is a major part of his children’s lives. (Getty)

Although Rubio has spent a good amount of time in Washington D.C. over the past few years, his family is still based in South Miami and he’s made sure that his children grew up in the same neighborhood he did.

In fact, the Rubio family currently lives just 10 minutes away from his mother and sister, a built-in support system that has been an enormous help throughout Rubio’s political career. Of course, that doesn’t mean it’s always smooth sailing, Jeanette described the Rubio’s home life to Community Table in 2013, saying:

Well, my family helps me a lot. But for the most part you just do it. You know? I mean, really, you just don’t think about it. As the kids get older, it does get easier. Driving them to their activities is where it gets more challenging. You drive to one activity and then another, and sometimes I don’t get home until 9 or 10 at night.

There are also fairly strict rules in the Rubio house. There’s a set dinner time every night and the family all eats together, sharing what happened during the course of their day. The kids also spend a good amount of time outside during the summer and Jeanette makes sure that they aren’t simply sitting around playing video games.

“Reading is a big one. I can’t stand them being on those video games, you know,” she added. “They only have an hour on the weekend. They don’t have time to watch TV.”

Rubio hasn’t been shy about discussing his football fandom throughout his campaign, he’s a big-time Florida fan who cites catching a football from Tim Tebow as a highlight of his political career, so it should be no surprise that his sons are also gridiron stars.

What may be surprising, however, is that Rubio finds time to, occasionally, coach his sons as well.

Jeanette regularly takes both Anthony and Dominic to football practice and, when he’s home, Marco makes sure he’s on the sidelines as well. Both sons also play basketball as well.

4. His Daughter, Daniella, Is an Avid Horseback Rider

While her brothers are racking up tackles on the football field, Daniella is an avid horseback rider and regularly competes in shows in Florida. The 13-year-old has been competing for years and it’s ensured that her family has criss-crossed the state almost as if they’re staging a mini campaign again.

While Daniella is focused on horseback riding, and raising her shih tzu dog, her older sister, Amanda, is a competitive stunt cheerleader. She takes after her mother who once cheered for the Miami Dolphins prior to marrying Rubio. Amanda made headlines in 2012 when at the age of 12, she was involved in a golf cart collision in a private gated community. She was airlifted to Miami Children’s Hospital after suffering a concussion, but made a full recovery.

5. The Rubio Kids Have Over 15 Cousins 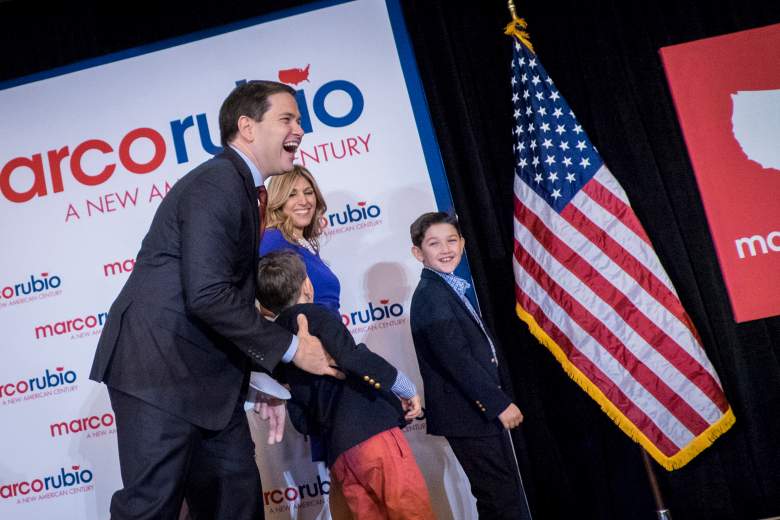 The Rubio family has a big-time support system at home and it’s made the past few months, slightly, easier. (Getty)

It may be hard to believe, but Jeanette and Marco Rubio actually have time to stage a date night every few weeks. Of course, it helps to have a family that’s close by to watch the children as well.

Rubio explained to Community Table how the extended family makes sure he and his wife get some time to themselves:

Because the kids have like 20 cousins between the ages of 15 and 5, they might be over at their cousin’s house. Or if not, we have a family friend whose daughter will babysit. But the truth is, if I’m gone during the week a lot, then on the weekend I want to be around the kids, too.

Jeanette’s sisters live near the Rubio family in Florida, as is Marco’s sister and, according to the Tampa Bay Times, the kids have at least a dozen cousins living within five miles.

It makes for an incredibly close family, and more importantly, one that is always ready to help each other.

Loading more stories
wpDiscuz
20
0
Would love your thoughts, please comment.x
()
x
| Reply
He may be a presidential candidate, but Marco Rubio is also, first and foremost, a father. Get know the Rubio children here.