The 66-year-old Antioch resident was first named in a report by ABC News. He was shot during the incident, which occurred on March 28. The Washington Post reports that he’s been taken to the Washington Hospital Center and is under police guard. He had undergone surgery after being wounded.

He’s being charged with assault with a deadly weapon and assaulting an officer while armed.

1. Dawson Described Himself as a ‘Prophet of God’ While Interrupting Congress in October 2015

In October 2015, Larry Dawson interrupted a House of Representatives session. The Daily Beast reported at the time that Dawson burst into the House chamber on a Thursday afternoon and declared himself to be a “prophet of God.” He was later accused of assaulting a police officer.

The Washington Post reported that during that incident, police officers tried to remove Dawson but he “refused to comply.” He broke free and tried to escape but he was eventually apprehended by a group of cops.

Voice of America reporter Cindy Saine reported that Dawson is “known to police” in the nation’s capital.

ABC Washington’s Chris Papst reports that after the incident in October, Dawson was issued with a “stay away order” from the Capitol building.

He wrote a letter to the federal court about the order, which you can read above. The Washington Post reports that he wrote the letter in lieu of appearing in court.

2. He Is the Pastor of a Tennessee Church & Has Traveled to D.C. to Push for a Higher Minimum Wage

Dawson is a pastor at St. Luke’s Community Church in Nashville, according to his Facebook page and the church’s website.

CBS Radio reporter Steven Portnoy says on Twitter that Dawson has tried to raise money in the past to travel to Washington, D.C. to call for a higher minimum wage:

The suspect, 66-yr-old Larry Dawson, is a TN pastor who has tried to raise money for trips to DC to push for a $15/hr minimum wage.

I HAVE BEEN TO WASHINGTON, DC. THREE (3) TIMES THIS YEAR PUSHING FOR A RAISE IN THE MINMUM WAGE.

“WE ASK YOU TO HELP US, BY GIVING A DONATION OF ANY AMOUNT, AS WE BEGAN OUR MINISTRY. AND PUSH FOR THE RAISE IN THE MINMUM WAGE.

THANK YOU FOR YOUR SUPPORT. MAY GOD BLESS YOU IN YOUR GIVING.

Dawson also writes on the website, “We thank God for past accomplishments, and for all the Elders and Saints that prayed us through. Now we look forward to a new and brighter future in Christ Jesus. We invite everyone to come and join in and worship with us. Our spirit filled services will be a blessing to you. I love each of you, and I thank you in advance for supporting the vision that God has given to this house.”

Speaking to the Washington Post, Dawson’s daughter, Kristie Holliman said she didn’t know why her dad was in D.C. at the time of the shooting. She told the newspaper, “I’m just trying to figure out what happened.”

Online records show that Dawson filed for bankruptcy in January 2011. He was discharged from personal liability for some of his debts in April 2011.

Those records say that Dawson lived at 7862 Rainey Drive in Antioch, Tennessee, the same address as his church.

He graduated from Carver-Smith High School in Columbia, Tennessee, according to his Facebook page.

4. A Bystander Was Injured in the Shooting

People being allowed back onto the street and fence line of the White House. 2nd lockdown today. pic.twitter.com/xJMvIGmzn3

A female bystander was injured in the shooting, but was not shot.

Meanwhile NBC Washington reports that Dawson was the only person shot. His wounds were also described as non-serious. The station also says that the suspect went through a metal detector, when it went off, he took out a gun, which sources now say was a pellet gun.

The U.S. Capitol Police has described the incident as a “potential security threat,” reports NBC Washington. U.S. senate staff received an email saying “gunshots have been reported” just after 2 p.m. on March 28, reports the Washington Post. The D.C. Police Department said there was never an active threat to the public.

The capitol and the visitor’s center were both locked down. WUSA reports that the White House was placed on lockdown as a result of the incident. A shelter-in-place order has been issued for buildings in the surrounding area. Congress was not in session at the time of the shooting.

In a press conference, a Capitol police spokesman said, “There is no reason to believe this is anything more than a criminal act.”

5. The U.S. Capitol Has a History of Violence

The last major shooting at the U.S. Capitol occurred in July 1998 when Russell Eugene Weston, Jr. killed Detective John Gibson and Officer Jacob Chestnut of the Capitol police. Weston’s motives were unknown but investigators believed that he had a strong distrust of the federal government and had been suffering from a mental disorder. He was never tried in court and remains in a mental institution where he’s being treated for paranoid schizophrenia.

The Washington Post reports that the metal detectors that caught the suspect in the March 28 incident, were installed after the July 1998 shooting.

More recently, a dental hygienist named Miriam Carey was shot dead by Capitol police after she tried to ram the gates of the complex in her car.

The visitor’s center is located on 1st Street NW. According to the center’s official website, the complex can hold up to 4,000 tourists at one time. The center is also used by congress to hold meetings. It features a 450-seat theater. It has three floors. 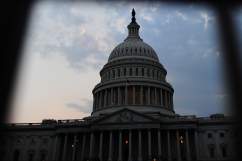 Loading more stories
wpDiscuz
35
0
Would love your thoughts, please comment.x
()
x
| Reply
A 66-year-old pastor from Tennessee who has called for a higher minimum wage was shot by U.S. Capitol Police.