A Milwaukee mother was shot dead by her 2-year-old son who somehow got ahold of a gun in the backseat of the car they were riding in, police say.

1. The Gun Belonged to Price’s Boyfriend, Who Is a Security Guard, Her Father Says

Patrice Price’s father, Andre Price, told WISN-TV that the gun and the car belong to her boyfriend, who has not been named. He works as a security guard.

Deputies say the loaded gun apparently slid out from under one of the front seats before the shooting, and the 2-year-old boy got ahold of it, the newspaper reports.

2. Price’s 1-Year-Old Son & Mother Were in the Front Passenger Seat

Police said Patrice Price’s mother and her 1-year-old son were sitting in the front seat of the car at the time of the shooting. Her 2-year-old son was in the back seat.

Neither child was sitting in a car seat, according to the Milwaukee Journal Sentinel.

The shooting remains under investigation, the Milwaukee County Sheriff’s Office says. The security officer boyfriend of Price has not been named and it is not clear if he is being investigated by police.

3. She Was Pronounced Dead at the Scene Despite Efforts From First Responders

Price was able to stop the car on the side of Wisconsin Highway 175 near West Vliet Street, WISN-TV reports.

The Milwaukee County Sheriff’s Office said deputies and EMTs began life-saving efforts when they arrived at the scene, but she was pronounced dead.

She had no pulse and was not breathing when first responders arrived at the scene. She suffered one gunshot wound, the sheriff’s office said.

4. She Was a ‘Hardworking Mother’ to the 2-Year-Old Boy & Her 2 Other Children

Patrice Price’s brother, Antonio Price, told the Milwaukee Journal Sentinel that she was a “hardworking” mother to her three children, including the 2-year-old boy who shot her. She also had a 1-year-old son and a 7-year-old daughter, he said.

“She was the best mom for her kids, put clothes on their back,” he told the newspaper. “When I needed her, she always cared for me and gave me great advice.”

Price’s father, Andre Price, told WISN-TV, “Now I don’t have her no more. My chest has been hurting. I have a knot in my chest. They won’t even let me see my daughter. I wanted to hold my daughter for one last time.”

5. A Florida Mother Was Shot by Her Son While Driving Last Month

A Florida mother and pro-gun advocate, Jamie Gilt, was wounded in a shooting when her 4-year-old son accidentally fired a gun as she drove.

Gilt, 31, was driving her car in Putnam County, Florida, on March 8 when she was shot.

She was hospitalized, but recovered. A criminal investigation into the shooting is ongoing as police determine whether Gilt should be charged. 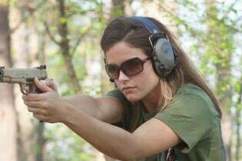 Loading more stories
wpDiscuz
8
0
Would love your thoughts, please comment.x
()
x
| Reply
Patrice Price, a 26-year-old Milwaukee mother, was shot dead while driving when her 2-year-old son got a hold of her boyfriend's gun in the backseat of her car.