Ted Cruz said that a “major announcement” will be forthcoming at his April 27 rally. Cruz, who won the Iowa caucus and several March GOP contests but has seen his campaign take a disastrous turn through April, did not specify the nature of his announcement.

Early speculation on the announcement leans toward him announcing a running mate, possibly former GOP rival and Hewlett-Packard CEO Carly Fiorina, who he previously confirmed is on his short list.

It’s unusual for a losing candidate to announce a running mate, but if it’s Fiorina, it wouldn’t be the first time that Cruz and Fiorina have bucked tradition in the 2016 GOP campaign. In late 2015, a Cruz-backing Super PAC, Keep the Promise I, donated $500,000 to the Fiorina campaign, a move election insiders and journalists couldn’t find a precedent for. While the donation has been the subject of ugly and unfounded rumors, Fiorina and Cruz have had a close professional relationship since Fiorina ended her campaign, which a VP pick would certainly cement. 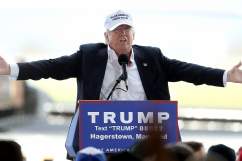 Read More
2016 Presidential Election, Politics, Ted Cruz
Ted Cruz will live stream a rally from Indianapolis today after teasing a "major announcement." which some have speculated to be his running-mate pick.