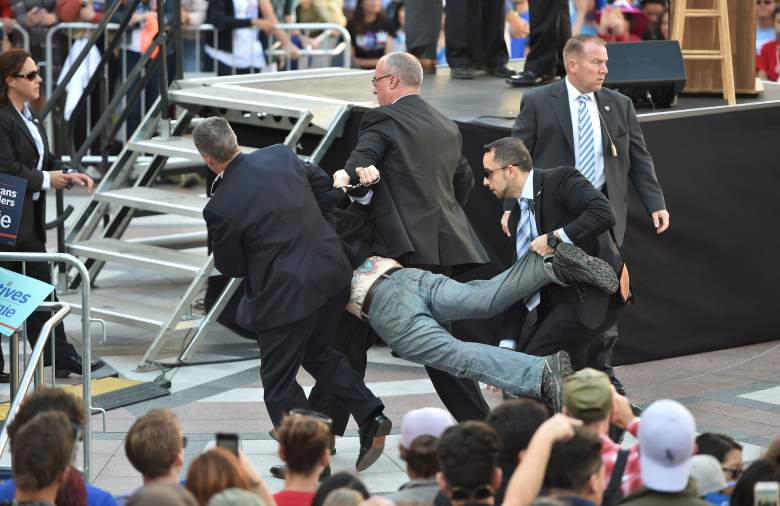 A protester is arrested during Bernie Sanders’ rally. (Getty)

Three protesters were arrested during Bernie Sanders’ rally in Oakland, California today. They jumped the barricade, shouting something unintelligible, and were quickly arrested by Secret Service as the crowd booed. Then the crowd quickly changed its tuned and began chanting “Bernie! Bernie!”

You can watch the video of what happened below:

According to NBC News, the protesters were animal rights activists. This has some supporters confused, since Bernie Sanders is a strong supporter of animal rights and family farms instead of factory farms.

In fact, this press release from Direct Action Everywhere talks about dozens of animal rights activists rushing Sanders’ stage and yelling “Animal Liberation Now!” On the video, you only see three or four before they are arrested.

Sanders didn’t seem intimidated at all by the protesters. As a Secret Service agent rushed to the platform, Sanders didn’t even flinch. He was very calm about the entire incident and even seemed reluctant to stop addressing the crowd at first:

After they were arrested, Sanders told the crowd, “We don’t get intimidated easily.” And someone yelled back, “We love you Bernie!”

Sanders has a strong record with animal rights, receiving a 100 percent rating from the Humane Society Legislative Fund. This has caused his supporters to wonder why, out of all the candidates, the animal rights activists would choose to protest at one of his rallies.

Direct Action Everywhere has members who support Sanders, but protests at some of his rallies in hopes of bringing attention to different aspects of legislation. According to the press release from Direct Action Everywhere, they were protesting Sanders’ support of “good farms,” because they believe that no farms are “good” for animals. Matt Johnson, a member of Direct Action Everywhere, said that he would ultimately push for a Species Equality Act that would end the commodity status of animals, and “transition away from animals as property, food, clothing, and entertainment,” according to a publication called Munchies.

Mhris Carco, who is the founder of SF Vegans, told Heavy that she didn’t agree with Direct Action Everywhere’s methods and was concerned about any media coverage given to the group.

On a SF Vegans Facebook page about Direct Action Everywhere’s protests at Sanders’ rally, other vegans voiced concern that the group was embarrassing them. They said they would have preferred if they handed out pamphlets about their beliefs to the rally attendees, rather than jumping barricades and getting arrested.

Bernie Sanders has a strong history of supporting animal welfare. Sanders has called for improving the rural economy and supports family farms instead of factory farms.

Loading more stories
wpDiscuz
30
0
Would love your thoughts, please comment.x
()
x
| Reply
Protesters jumped a barricade and were arrested during Bernie's Oakland rally. Watch the video here and find out who they were and what they were protesting.