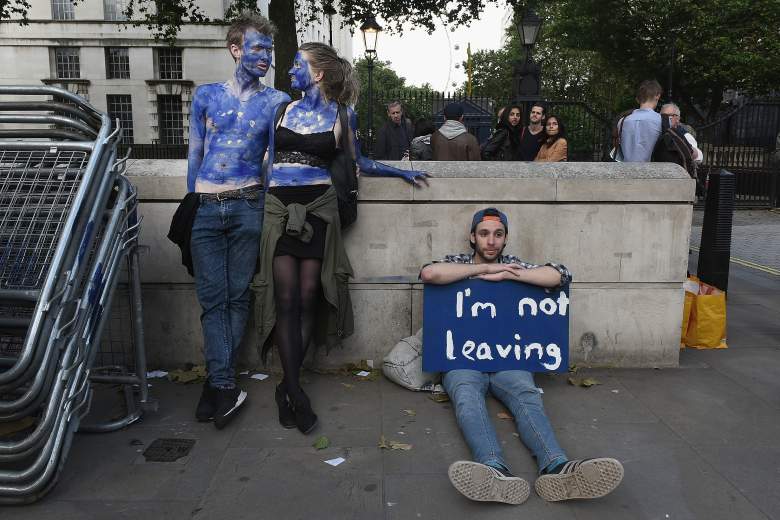 A parliamentary petition to hold a second EU Referendum in Britain has received more than 3 million signatures since a ‘Brexit’ was confirmed. (Getty)

As the United Kingdom and the rest of the world continues to reel from the historic vote Thursday signaling Britain’s departure from the European Union, an online petition to hold a second EU Referendum is also making history.

We, the undersigned, call upon HM Government to implement a rule that if the Remain or Leave vote is less than 60% based [on] a turnout less than 75%, there should be another referendum.

Since the petition was created, the number of signatures has skyrocketed to more than three million. In fact, so many Brits were trying to add their signatures to the petition, that the site became temporarily unavailable. A House of Commons spokeswoman characterized the site crash as due to: “exceptionally high volumes of simultaneous users on a single petition, significantly higher than on any previous occasion.”

According to the rules for petitions filed with UK Government, a minimum of 10,000 signatures are needed for government to respond, and a minimum of 100,000 signatures are required for a debate on the petition to be considered by Members of Parliament in the House of Commons – the petition had received more than the required within just a few hours. Further, the website states:

Petitions which reach 100,000 signatures are almost always debated. But we may decide not to put a petition forward for debate if the issue has already been debated recently or there’s a debate scheduled for the near future. If that’s the case, we’ll tell you how you can find out more about parliamentary debates on the issue raised by your petition.

The voter turn-out Thursday was 72.2 percent, but as the previous EU Referendum in Britain was more than 40 years ago in 1975 a comparison of voter turn-out does not provide much insight. Since 1992, no general election has had a voter turnout at or above 75 percent, with 66.1 percent of the voting population having cast their ballots in last year’s general election. However, the referendum on Scottish independence in 2014 had remarkably higher voter turn-out, with 84.6 percent of the voting public casting ballots. So while there may not be precedent, legal or otherwise, the Scottish independence referendum is evidence that a 75 percent voter turn-out threshold isn’t entirely unrealistic.

A second referendum would likely to be welcomed at least by residents in Northern Ireland, Scotland, and the city of London, where the proportion of votes for remaining within the EU were highest. A second referendum may also be welcomed by some who voted Leave and are now experiencing buyer’s remorse, discussed on Twitter with the hashtags #Bregret and #Regrexit, sharing on social media and in interviews that they made the vote in protest or without giving weight to the ramifications of the outcome.

Whether parliament decides to debate the petition in the House of Commons is one matter, but success of the bid beyond that is quite another. The EU Referendum vote is technically advisory and not mandatory, and as such British Prime Minister David Cameron is not legally bound to follow the outcome by invoking Article 50 of the Lisbon Treaty to start terms of Britain’s exit from the EU. Further, Members of Parliament make the overarching decision as a sovereign body, and with pro-EU ministers outnumbering MPs who support leave 450 to 200, perhaps a second vote could be on the table. The committee to decide whether the petition will be considered for parliamentary debate will sit on Tuesday. Until then, the petition is likely to continue amassing more signatures.

Nevertheless, Cameron made it quite clear at the World Economic Forum in May that Thursday’s vote was final regardless of the outcome and that Britain would not hold a second EU Referendum. He stated: “If you vote to stay we stay and that’s it-and if we vote to leave, we leave, that’s it. You can’t have ‘neverendums.’”

Jeremy Corbyn, leader of the Labour party, similarly dismissed the idea of the UK holding a second referendum, stating after Thursday’s vote: “The referendum has taken place, a decision has been made. I think we have got to accept that decision and work out our relationship with Europe in the future.”

In addition to Cameron’s firm stance in opposition of a second referendum, there is also the firm position from EU leadership in Brussels on a UK departure, both before and after the vote took place. In the lead up to the historic referendum, a spokeswoman from Brussels said:

The process is set out very clearly in the treaties. A vote to leave is a vote to leave. The prime minister stood on a manifesto that made clear that this government would give the British people a choice whether to remain in the EU or to leave – a very simple, straightforward choice, remain or leave. If the British people vote to leave then the government will clearly respect the outcome of that; it will then launch the process to leave and that is set out clearly. It is a two-year, time-limited process.

While Cameron and even members of the Leave campaign including Johnson have suggested in light of the outcome that there is no rush for Article 50 to be invoked, the call from Brussels is one for swift action. Jean-Claude Juncker, the EU Commission chief, has said that “it doesn’t make any sense to wait until October to try and negotiate the terms of their departure” and he “would like to get started immediately.” French Foreign Minister Jean-Marc Ayrault echoed this call for expediency, stating: “There is a certain urgency […] so that we don’t have a period of uncertainty, with financial consequences.”

Loading more stories
wpDiscuz
6
0
Would love your thoughts, please comment.x
()
x
| Reply
A petition for a second EU Referendum has received millions of signatures. But can Britain hold a second vote?