An engineering professor and father was killed by an aggrieved student in a shocking murder-suicide that happened on campus at UCLA on June 1. The victim has been named as Professor William Klug, reports CBS News’ Charlie Kaye. He was a teacher in Mechanical and Aerospace Engineering, according to his official bio on the school’s website. The suspect has been named as Mainak Sarkar.

The shooting prompted a two-hour lockdown at the school with LAPD Chief Charlie Beck telling the media when it was over, “The campus is entirely contained. We believe there are no suspects outstanding and no continuing threat to UCLA’s campus.” William Scott Klug was 39 years old.

1. The Shooter Killed Prof Klug Because He Was Angry About His Grades

The Daily Bruin reports that the shooter has been described as a white male who six feet tall. The newspaper adds that he was wearing a black jacket and black pants.

Boelter Hall, where the shots were reportedly fired. (maps.ucla.edu)

In his press conference immediately after the shooting, Chief Herren alluded to the incident possibly being a murder/suicide. KNX reporter Rob Archer tweeted that a suicide note was recovered at the scene.

KNX reporter Claudia Peschiutta tweeted that the shooter was “despondent” over his grades, which prompted the shooting.

The Los Angeles Times reports that Klug was killed inside of an office in the engineering complex. 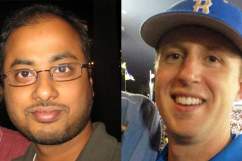 2. Klug Was a UCLA Alumnus

On his official bio, it says that Klug is a graduate of Westmont College (1998), he got his masters at UCLA in 1999 before getting his doctorate at Caltech, graduating in 2003. His thesis was titled, “A director-field theory of DNA packaging in bacteriophage viruses.”

He had his own research group at the school. On their website, the Klug Research Group says:

We are primarily interested in theoretical and computational biomechanics. In particular, we are developing continuum and multiscale methods to understand the mechanics of biological structures from the molecular and cellular scales upward. Some of our projects are listed below.

There are six doctoral students involved in the research group. His last published work was in 2012.

His friend Lance Giroux told CBS Los Angeles that, “Kids loved working with him because he was such an easy coach to work with.”

A professor of integrative biology and physiology, Alan Garfinkel, told the Los Angeles Times, “I am absolutely devastated. You cannot ask for a nicer, gentler, sweeter and more supportive guy than William Klug.”

3. He Was a Man of Deep Faith, Once Saying ‘I Developed a Habit of Relying on God’

In a feature for Westmont College’s magazine, Klug spoke about his faith and his career saying:

Knowing there is a God responsible for the world makes a big difference in my motivation to understand it better. I developed a habit of relying on God for what I felt was beyond my ability to control or what I couldn’t do for myself.

His wife, Mary Elise Richter Klug, is also an engineer, she graduated from Westmont in 1997. She then worked in consulting for aeronautical engineering firms. Klug’s wife got her master’s at UCLA too to which he quipped, “I followed her there.” The couple married in December 1999.

A separate feature on Klug’s wife says that she is an “accomplished, award-winning ceramics artist.” She is a native of Cerritos, California.

The couple lived in El Segundo with their two kids where Klug coached his son’s little league team, reports CBS Los Angeles. Giroux told the network, “To have your son grow up without a dad is rough. So I’m hoping the community here can kind of rally around that.” His son is in the fourth grade, reports ABC Los Angeles.

The team took the field just hours after shooting because “parents said it’s what Klug would have wanted,” reports CBS News.

One photo on Klug’s Google Plus page shows him with a child at a UCLA game. His YouTube channel shows a playlist of hockey, baseball and gameshow clips.

A Go Fund Me page has been set up to help Klug’s family. It was created by the El Segundo Community. The message reads:

The El Segundo Community would like to ask for your support for the family of Bill Klug, a UCLA Engineering Professor who was killed on June 1st by a student upset about his grades.

Bill was a loving father, great coach, and a valued member of this close-knit California town.

His family was the most important thing to him and our goal is to make sure they are taken care of now and in the future.

The money will be used for supporting the family and college for his son and daughter.

Bill meant a lot to this town, and so much more to his beautiful family. To have his life taken in this senseless and violent way is incomprehensible. Please give whatever you can to support his family and the legacy he leaves both in his community and at UCLA.

4. The Shooting Prompted All Activities at UCLA to Be Canceled for 24 Hours

According to officials, the LAPD sent a SWAT team to the campus. The school was put on lockdown with officials asking administrators to cancel school activities for the rest of the day. Some engineering classes will remain canceled this week while the investigation continues.

Using my belt to lock the door down. #UCLA #activeshooter pic.twitter.com/XIxm0uWIe3

Fox Los Angeles’ Jeff Michael reported in the aftermath of the shooting, that “Police presence heavy on UCLA campus but little activity. Students told to stay put.” The ATF also responded to the scene. President Obama was briefed about the shooting on board Air Force One, reports KNX.

The doors open outward and we can't lock them so we are barricading things in front of the door #Ucla #activeshooter pic.twitter.com/KwA3VjqVHh

One student, Mewish Khan, described the chaotic scene to the Los Angeles Times saying, “The whole campus just started running and I started running too. Everyone was very confused. We got in a building, and no one knew what was going on. A lot of people thought it was a joke or a drill.”

While another student told CBS Los Angeles that a teacher “made them flip all the tables, put them up against the door.”

5. Conservative Commentator Dana Loesch Has Said the Shooting Is an Example of Why Gun Control Doesn’t Work

In the immediate aftermath of the shooting, conservative commentator Dana Loesch sparked a Twitter war by saying, “UCLA is a gun-free premises in a gun free zone in a state with universal background checks. How did this happen, gun control lobby?”

According to Armed Campus, “The overwhelming majority of the 4,400 colleges and universities in the United States prohibit the carrying of firearms on their campuses.” The website says that the only states that allow firearms on college campuses are Arkansas, Colorado, Idaho, Kansas, Mississippi, Oregon, Utah, Texas and Wisconsin.”

The shooting at UCLA happened the day before National Gun Violence Awareness Day.

Loading more stories
wpDiscuz
16
0
Would love your thoughts, please comment.x
()
x
| Reply
An engineering professor and father was killed by an aggrieved student in a shocking murder-suicide that happened on campus at UCLA on June 1.