Anna Eberhart, a high school student and keyboardist from Texas, is the subject of a viral video that has been viewed more than 3.1 million times on Facebook, according to the Houston Chronicle.

The video, which was also posted to YouTube, was entitled “possibly possessed keyboard player steals the show.” People Magazine said Eberhart was “mesmerizing the Internet.”

The Chronicle says that Eberhart is a high school student in Denton, Texas. In the video, Eberhart performs with the Boston Crusaders Drum and Bugle Corp., said the Chronicle. Eberhart’s Facebook page says she attends John H. Guyer High School.

The video shows her wearing a red, black and white marching band uniform while playing the keyboard. What’s getting attention is the variety of faces she makes during the video, which has also sparked Reddit threads. According to the Boston Crusaders Drum and Bugle Corp. website, the Crusaders, founded in 1940, is the “third-oldest junior drum and bugle corps in the nation.” Band members, all under 22, travel throughout the country each summer.

Since the video went viral, Eberhart told TMZ that she is 17 and is hoping that the millions of Facebook views will help her career. TMZ said she wants to work at Disney as a princess character, especially Rapunzel. TMZ calls Eberhart’s explanation for why she was “mean mugging” in the video a “literary classic.” 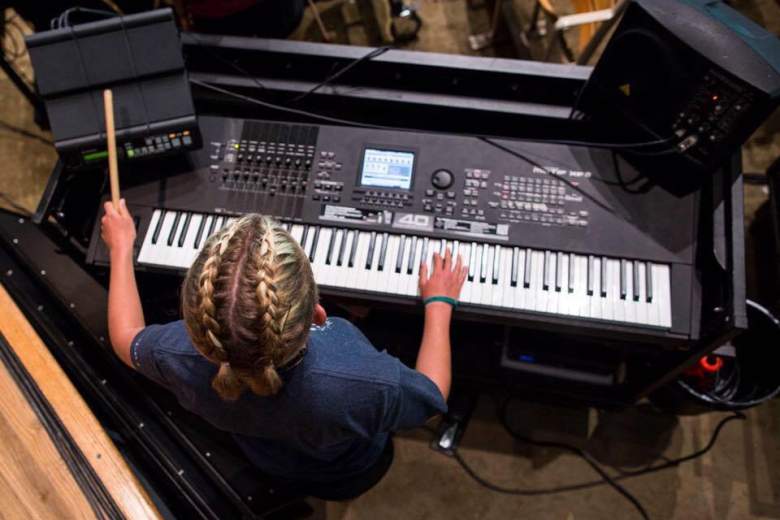 “Oh, hey, that’s us!” The Boston Crusaders Facebook page said, posting the video. Eberhart’s mother, Melinda Johnson Eberhart, commented on Facebook that her daughter doesn’t normally make such faces, saying, “As her momma, the funniest thing is actually how sweet tempered she is by nature! LOL. My heart is just overflowing,” People Magazine reported.

On Facebook, Eberhart has posted photos of herself in her band uniform.

@AnnaEberhart ? Sorry … this will never get old. Can't wait to see your show again in Allentown! https://t.co/bdN6snG1Pa

Sorry for all the retweets of @AnnaEberhart but she's pretty cool. Just saying…

@AnnaEberhart okay I'm pretty sure you're not possessed ?