Stephen Brumby. His mother, Elizabeth, posted this photo to Facebook, saying “There are no words…” (Facebook/Elizabeth Brumby)

A Sarasota, Florida father, William “Clayton” Brumby, a church sign salesman and religious book author, accidentally shot and killed his 14-year-old son at a gun range on July 3, according to the Tampa Bay Times.

The Times said that Stephen Brumby was standing behind his father when he was shot and killed. The shooting was an accident, said the Tampa Bay Times. The father is the author of the book, “Do You Still Think God is Good? Candid Conversations about the Problem of Evil.”

The gun didn’t kill my boy. I did. Every round in the gun is your responsibility. When it fires you need to stand to account for it it. That’s what I’ve spent the last two days doing, accounting for my operating error.

1. William Brumby Accidentally Fired His Gun While Trying to Remove a Casing From His Shirt

The Tampa Bay Times says the father was shooting rounds in the far right shooting lane of the gun range, next to a wall, citing witness statements and video footage. “One of the shell casings hit the wall, ricocheted off and dropped down the back of Brumby’s shirt,” the newspaper said.

Brumby tried to remove the casing using his right hand. He had that gun in his hand. “While doing so, he pointed the gun behind him and accidentally fired, deputies said,” according to the Tampa Bay Times. However, an WFTS reporter in Tampa Bay Tweeted this:

William Brumby told CNN the round hit the ceiling before striking Stephen. He added, according to CNN:

2. The Gun Store Had Previously Posted a Meme of a Child Holding a Rifle

CBS News reports that the shooting range posted a meme on its Facebook page just last month that showed a child holding a rifle and the words, “Properly trained kids don’t have accidents.”

“At High Noon Guns, we are firm believers that safety comes first. And part of that is ensuring we teach our children gun safety,” CBS News quoted the site as saying. Several memes on the Facebook page show children.

According to the shop’s website, people 14-years-old or younger are able to shoot free if a parent or guardian is along, said CBS News. The gun range has posted a skull and crossbones as its profile picture on Facebook. Other memes posted on the Facebook page include such comments as “Happiness is a warm gun,” and “Let’s just take a moment to admire this .357.” The gun range Facebook page also says that it offers a parent-child safety training course.

William Brumby, 64, was at the shooting range with Stephen, another son, and his daughter when the shooting occurred at the High Noon Gun Range in Sarasota, Florida, said the Tampa Bay Times. According to the Go Fund Me site set up for the Brumby family, Stephen Brumby is the fourth of seven children in the family.

Stephen was 4th of 7 children. His oldest brother David says they loved the outdoors, and shooting at the range with their dad. #Sarasota

According to WWSB TV, Brumby’s 24-year-old son and 12-year-old daughter were present, but neither was injured. Stephen Brumby was taken to an area hospital, where he died.

“What a beautiful spirit filled family! I love the Brumbys!” said one comment under a family photo of the large family. 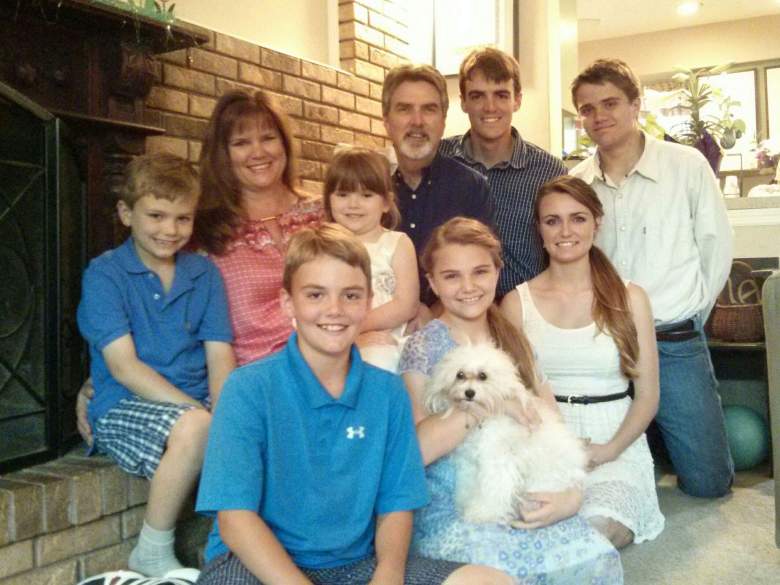 According to his Facebook page, William Brumby, who goes by the name Clayton Brumby on social media, works in sales for J.M. Stewart Corp., in Sarasota Florida. He studied speech communication at Florida State University and is from Coral Gables, Florida. William Brumby’s LinkedIn page says that he is the author of the book, “DO YOU STILL THINK GOD IS GOOD?” The page says that he is Sales Manager for Pennsylvania, Georgia and New Mexico for the corporation where he works, adding, “I consult with our church customers, then design and sell church signs. We are the manufacturer.”

William “Clayton” Brumby has also worked in financial services and was a youth pastor at St. Thomas Episcopal Church, Thomasville, Ga, his LinkedIn page says. According to his author bio on Amazon, “Clayton Brumby graduated from Florida State University in 1974 with a Bachelor of Science in speech communication. He spent ten years in youth ministry, both urban and high school, before entering a sales career in 1986. His articles have appeared in Touchstone (the Society of St. James) and Your Church magazine. He lives in Sarasota, Florida with his wife and family.”

Stephen Brumby’s mother wrote on this photo, “Stephen and Thomas at the Sarasota Open with Kei Nishikori, the #4 player in the world!” (Facebook/Elizabeth Brumby)

The Go Fund Me site set up for the family calls Stephen Brumby “a meteor that couldn’t be contained” by his family or anyone that knew him. The site says that Brumby’s favorite activities were fishing, tennis, music, archery and knife throwing. The site continues that:

He had an insatiable appetite to learn and was constantly sharing his wisdom with those around him. He was passionate about his Lord and Savior Jesus Christ and dedicated his life to sharing his hope with everyone he met. The families’ only comfort is knowing that He is communing with the heroes of his faith and rejoicing in paradise.

WTSP TV reports that, according to sheriff’s officials, criminal charges are not pending against William Brumby. The Sarasota Herald Tribune says Stephen Brumby was home schooled.

William Brumby told CNN: “I can’t fix this. It’s just a great loss but thankfully we’ll see him someday. I have a feeling he’s on a great lake out there.”